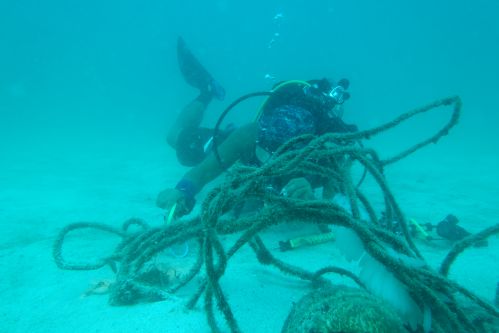 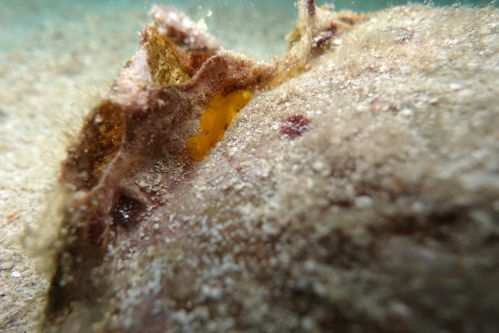 Scuba diving has gained attention and grown in popularity among Malaysians. Malaysia is a Southeast Asian country popular among travellers due to its incredible marine life. A few days ago, a trip was organised to conduct an exploration dive with D’Lagoon Dive Centre at Perhentian Island, Kuala Terengganu, led by Azharil Art, a well experienced diving instructor.

This exploration dive was conducted within two days for three dives. It started on 10 October 2020, with the first dive at 3.00 pm. The plan was to dive at 15-16 m depth and look for juvenile and macro-sized marine life in that area. It did not take a long time to locate juvenile frogfish even though the visibility was 3 m, which might be a problem for a new diver to face such a condition. The current was also quite heavy. Nonetheless, the team managed to find other marine life such as yellow goby, spider crab, and orangutan crab. These creatures were found in the solid waste accumulated at the lagoon, and it took around 80 minutes to search for them.

The second and third dives were then conducted on the next day at 9.00 am and 12.30 am, respectively. On the 68-minute second dive, the dive site visited was 5 m away from the Vietnamese wreck at 22-23 m depth. Meanwhile, on the 70-minute third dive, the dive site visited was the same as the first dive, Art’s Holy Sand, with a deeper area of 16-20 m. The visibility was the same at 3 m. Marine life found were soft crab, juvenile octopus, transparent shrimp, frogfish, and saddleback nemo. Again, all these creatures were found at the accumulated underwater solid waste.

According to other scientific research conducted by the Europeans and Indonesians since 2007, other small creatures will stay and grow at the solid waste. It is believed that this is because these solid waste turns out to be artificial reefs. These reefs enrich the marine life by providing shaded shelter from strong currents and protection from predators. They also provide a firm substrate for attachment, a source of food in the form of algae and other attached or encrusting organisms, and small fish and invertebrates that are usually associated with them. These reefs provide breeding and nursery areas and also act as a visual, tactile, or even auditory reference point for the orientation of some pelagic organisms. Even though it is mentioned that various factors, such as the environment, could attract fishes to artificial reefs, but the elementary question of what draws them to the reefs still remains unanswered. Hence, throughout this exploration dive, it would be great to do some study on accumulated solid waste for underwater sustainability. The writer is the Director of the UMP Co-Curriculum Centre and Senior Lecturer at the Faculty of Mechanical and Automotive Engineering Technology (FTKMA), Universiti Malaysia Pahang (UMP)