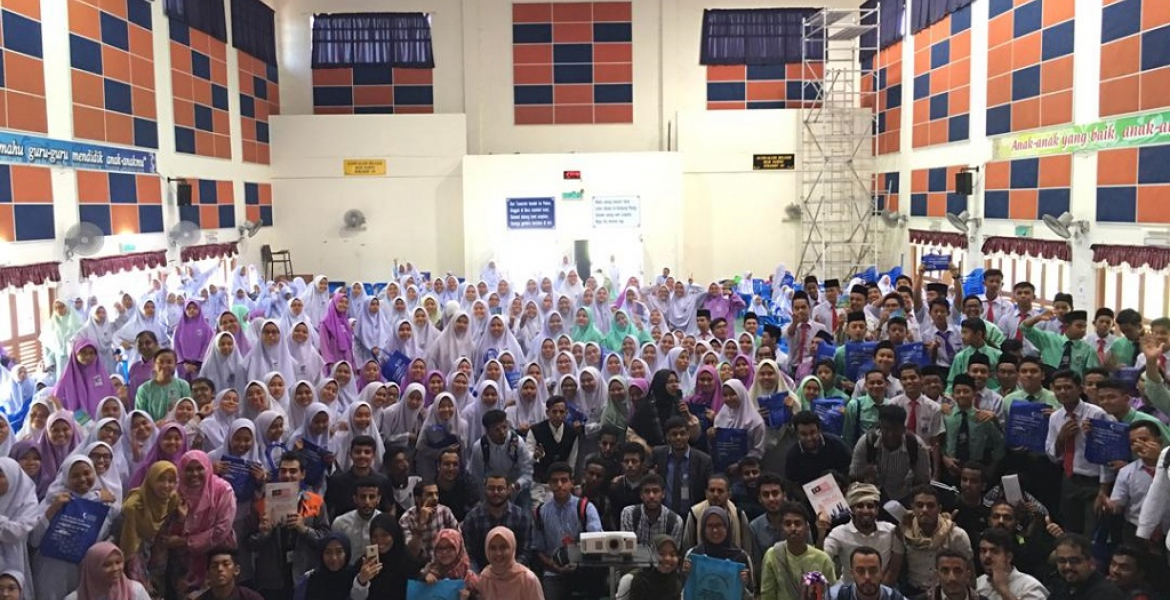 Universiti Malaysia Pahang (UMP)’s Centre for Modern Languages & Human Sciences (CMLHS) organised the Enhancement of Malay Language Carnival and Community Service involving 35 of its foreign undergraduates who were from Yemen, Egypt, Iraq, Syria and Sudan, and 444 students from Sekolah Menengah Kebangsaan Seri Bera.
The event, which was held on April 23, 2019, saw the participants taking part in cross-cultural programmes of the Malay language and culture and that of the international cultures.
According to Programme Director, Juwairiah Osman, who is from the Foreign Language Department of CMLHS, the foreign students were from UMP Gambang Campus who took the UHF1161: Malay for Beginners and UHF2161: Malay for Intermediate courses.
She added that among the activities that were carried out were teaching the school students techniques on how to answer the Sijil Pelajaran Malaysia (SPM)’s Bahasa Melayu paper, presenting motivational and career talks and showcasing the ‘Jom Masuk UMP’ exhibition.
“There are other exhibitions that showcased how the Malay language has innovatively progressed internationally as well as exhibitions that display the cultures of Yemen, Egypt, Syria, Sudan, Somalia and China,” she added.
She also said that the programme had made good impacts in generating the interest in the language and the interest to master the language and that it managed UMP to establish good ties with the community especially schools.
Juwairiah said the carnival’s committee consisted of language teachers from the Department of Foreign Language while the facilitators were UMP students taking the soft skill subject and those from UMP Orator Club.
UMP student Ahmed Adel Shahnan, who is from Yemen, said he was glad to be able to participate in the programme and learn about the school system in Malaysia.
Ahmed Adel Shanan, an undergraduate at Faculty of Computer Systems & Software Engineering (FSKKP), said he was thrilled to be able to communicate with the school students.
Another participant Ammar Abdullah Manea Alkhawlani, also from Yemen, said he could now converse in Malay.
“Normally, I would communicate with my Malay, Chinese and Indian friends in campus. I am fortunate to get the opportunity to meet teachers and students from the school. The experience was surely wonderful,” he added.
In UMP, students can learn the Malay language, share new experience and tell stories about the specialities of Malaysia, the state of Pahang, the university and the fun of communicating in Malay.
In a move to make foreign students understand the language better, UMP carried out various programmes such as the ‘It’s Fun to Speak in Malay’ programme where participants would take part in dramas, poem reading and public speaking.
Some of them had participated in the Prime Minister Cup International Malay Speaking Competition that was held annually since 2006.