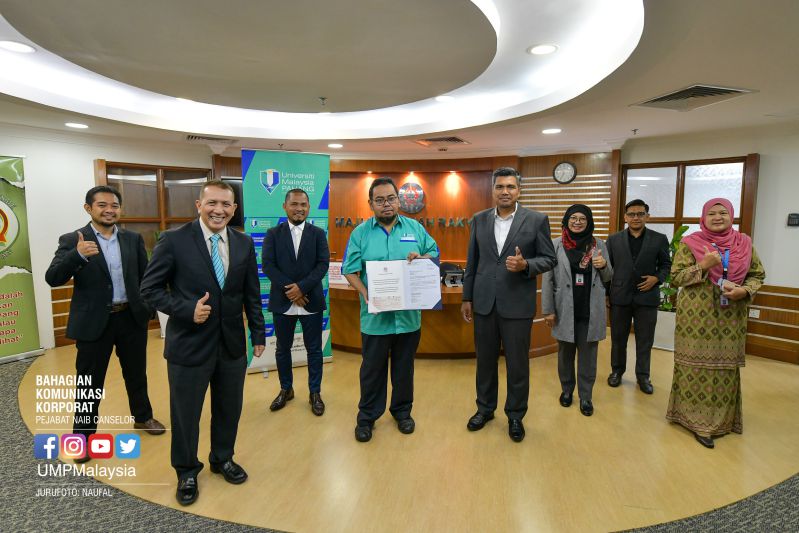 Kuala Lumpur, 30 September 2020 - The country’s first halal gelatin project will begin in Pahang soon when Universiti Malaysia Pahang (UMP) received the remaining RM5 million via the collaboration project with the Majlis Amanah Rakyat (MARA) involving a total allocation of RM20 million which is disbursed in stages in the form of grants.

Present at the handover ceremony were the Director of the Commercial Infrastructure Division of MARA, Zahari Aziz and the Deputy Vice-Chancellor (Research and Innovation), Professor Ts. Dr. Kamal Zuhairi Zamli.

This production can contribute to the global halal gelatin needs of almost 90,000 tonnes per year.

“Gelatin is increasingly in demand when it is widely used in various industries such as the food, beverage, photography, pharmaceutical, and cosmetics industries.

“It will also create spillover effects that will attract more local entrepreneurs, create employment opportunities for the local community and university alumni as well as provide industrial training facilities.

“With the expertise of scientific research, the exploration of this project will create a new industry in the prospect of expansion of the halal gelatin industry in the country.

“The university will play a greater role especially in the production of halal gelatin through the sharing of expertise, research development, training, and business networking,” he said at the ceremony held at the MARA Headquarters in Kuala Lumpur Office recently.

For Professor Dato’ Ts. Dr. Rosli, his side received cooperation from BCA International Sdn. Bhd. which adequately allocates budget for the realisation of this project

“The existence of halal gelatin incubators on campus provides a great opportunity for researchers to conduct training for UMP lecturers and students.

“The internal access in the campus enables them to conduct product research and development.

“Also, the university will also benefit from the company’s expertise in the halal industry, especially in technical knowledge, process optimisation and human resource development,” he said.

He added as the gelatin industry is highly dependent on animal sources, UMP requires expert assistance and advice from the Department of Veterinary Services.

“This department acts as the authority responsible for ensuring high-level production compliance and integrity following the law and standard operating procedures.

“In addition, this collaboration receives support from the stakeholders such as the Department of Islamic Development Malaysia (JAKIM) in establishing the first halal gelatin manufacturing facility,” he said.

For Hairon Mohd Nizam, his visit to China also found the UMP has the same expertise.

“Starting with the incubator of halal gelatin in ITECS UMP Pekan with an annual capacity of 360 tonnes, UMP Green Technology and BCA International will develop a halal gelatin factory of 3,000 metric tonnes per year to meet the local and international demands.

“Several locations are being identified for the development of Halal Gelatin Hub outside Pahang,” he said.

By: Mimi Rabita Abdul Wahit, Public Relations Unit, The Office of The Vice-Chancellor