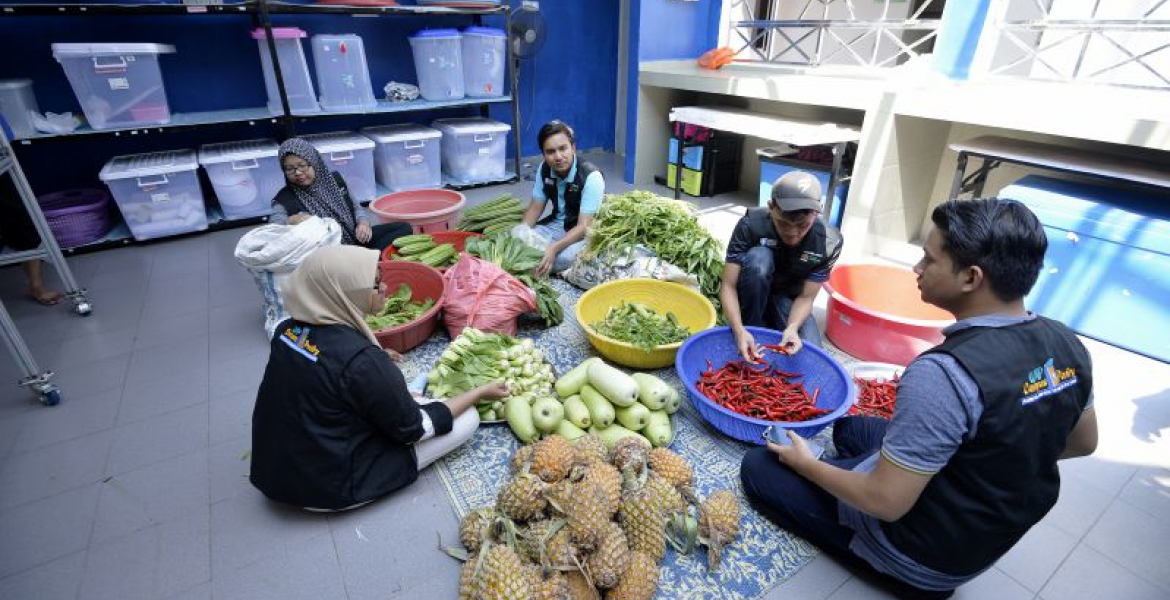 A total of 200 volunteers consisting of 110 volunteers from UMP Gambang and 90 from UMP Pekan involved in the establishing UMP Campus Pantry at both campuses on 13 March 2020.
They were divided into two groups that managed dry foods and daily necessities such as detergent, toothbrushes and soaps, and the other group managed wet foods such as vegetables, fruits and fish.
According to the Head of Volunteers, Ikmal Shauqi Burhan, 20, the volunteers were brought to Pasar Besar Kuantan as early as 7.30 am to get the leftover vegetables from the grocers or donors.
“The food supplies will be taken to UMP Mosque for preprocessing before being distributed to the UMP students who live off campus.
The distribution is done at around 4.00 pm because this the usual time that a few students return from lectures,” he said.
The volunteers on duty will ensure food such as bread, biscuits and essential items are in good condition and arranged in the space provided.
He and his team thanked UMP for the care and concern for the welfare of students at the university.
Meanwhile, the Deputy Vice-Chancellor (Student Affairs and Alumni), Professor Dato’ Dr. Yusserie Zainuddin said that UMP has started this Campus Pantry before the Ministry of Domestic Trade and Consumer Affairs launched  Food Bank in UMP.
“UMP Campus Pantry provides wet and dry foods contributed by various agencies, UMP associates, individuals and supermarkets.
“At the same time, we also receive donations from UMP Foundation that helps UMP Campus Pantry a lot.
“Until now, a total or 1,500 students have benefited from UMP Campus Pantry, and the number is growing day by day.
As we have 60% students from the B40 class with less than RM3,000 monthly earning,” he said.
He also emphasised that 28% of the students come from the families with less than RM1,000 monthly earning.
“So it really helps ease their burden.
“UMP Campus Pantry is now open in the morning session as well and all the items are all taken by students.
“Students who have financial problems and wanted to get food supplies just need to come here and take it by simply registrering in the system provided,” he said.
For one of the contributors, Tan Kwai Loon, who is also an alumnus of UMP, every week he contributes almost 300 kg of vegetables such as cucumbers, green mustards, water spinach, bitter gourd, chillies and many more.
“The vegetables are the leftover that can still be used and they are local produce at individual farm,” he said.
The Student Affairs and Alumni Department (JHEPA) will always ensure an adequate supply especially towards the end of the semester, when most students in greater need of food and money during this time.
Translation by: Dr. Rozaimi Abu Samah, Faculty Of Chemical And Process Engineering Technology