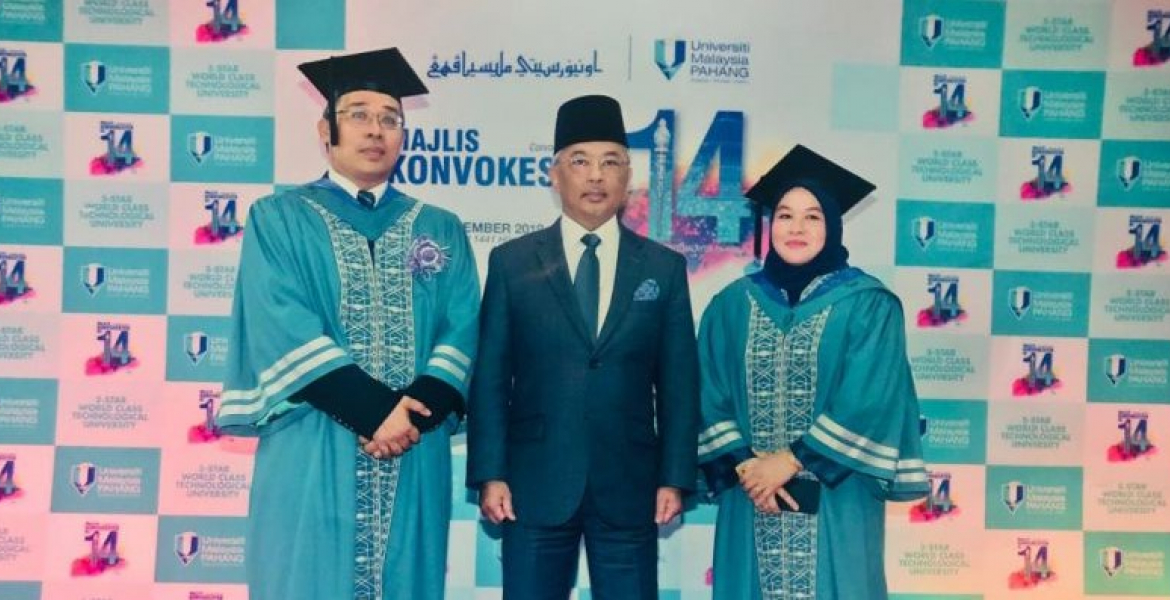 Although his work as a special officer to His Royal Highness Sultan of Pahang kept him busy most of the time, it did not stop Ahmad Norbadelin Abdul Murad, 50, from completing his Executive Master in Project Management together with his beloved wife, Zuriati Hassan, also 50, who completed her Executive Master in Business Management.

Both Ahmad Norbadelin and Zuriati work at the same place – the Office of His Royal Highness of Sultan of Pahang, and both did their executive masters’ programme at UMP Advanced Education.

“I have long dreamed that one day, I will stand proud on the stage as a graduate.

“Alhamdullilah, our prayers have been answered and I shared the stage together with my wife,” he said.

Ahmad Norbadelin also said he had not expected to attend his own graduation this time around as prior to this, he had only come for official duties - which was to escort Sultan of Pahang.

Ahmad Norbadelin said he was fortunate enough to have his family’s support when he expressed his desire to continue studies.

He added that there were constraints and these were not so much due to their young children but more to the challenges of juggling his time between work and studies because his duties were not exactly the nine-to-five-kind of work.

He still recalled having to rush to attend classes in UMP, dressed in full traditional attire - the Baju Melayu, as he had straight away came from work.

As for Zuriati, she said age was not a factor for one to pursue their studies.

“At times, the atmosphere in the lecture room makes you very sprightly and positive, good vibes to see you through your studies.

“Although my classmates are around the age of my children, they are very supportive and readily share their knowledge with me.

“What is equally important is to focus in class and complete assignments within the given time,” she said.
For the couple, it was their most beautiful, memorable moment when they received their scrolls from His Royal Highness Yang di-Pertuan Agong Al-Sultan Abdullah Ri’ayatuddin Al-Mustafa Billah Shah Ibni Al-Marhum Sultan Haji Ahmad Shah Al-Musta’in Billah during the university’s 14th convocation that was held recently.