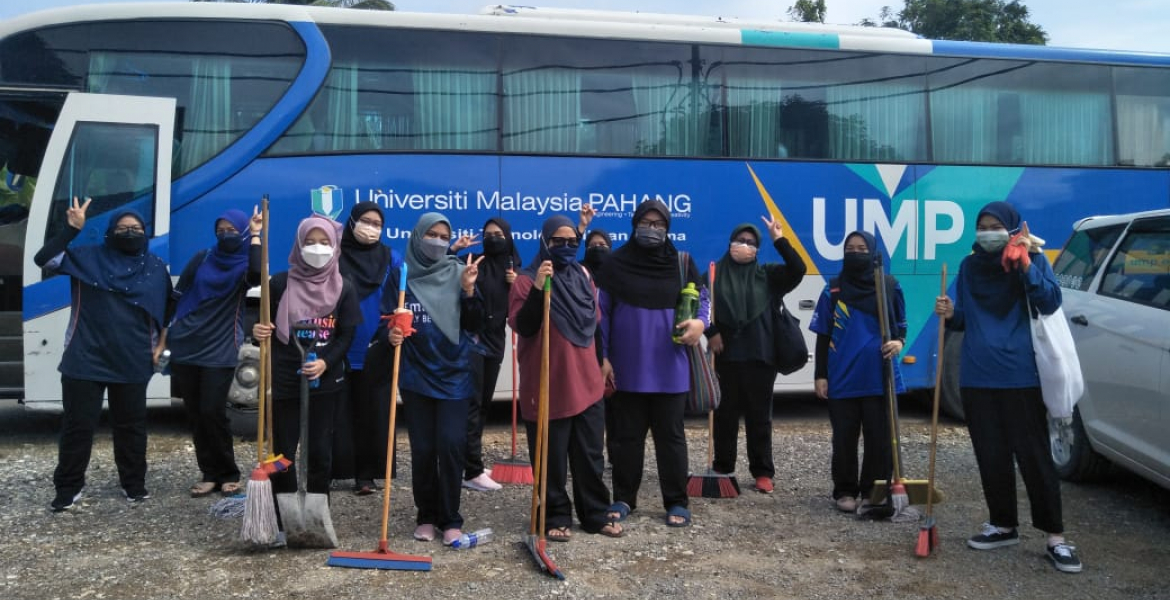 TEMERLOH, 31 December 2021 - Surprised and moved. Those were the feelings invoked when a group of volunteers from Universiti Malaysia Pahang (UMP) consisting of staff and students suddenly appeared in front of UMP students’ houses to help clean their homes affected by the flood recently.

According to the student of Bachelor of Project Management UMP Natasyabillah Afzainizam, she almost shed tears.

“When I was tested, Allah SWT sent help for my family to clean the house due to flooding,” she said.

“There’s nothing I can say but a million thanks.

“The assistance from nearly 40 volunteers helped clean the entire house.

“They not only did come with the help but also brought food donations and other necessities such as blankets and pillows,” she said in an emotional tone.

She was raised in Kampung Tebal, Seberang Temerloh and she expressed her gratitude and thankfulness to UMP.

This help can surely reduce the burden incurred, especially the damage to necessities at home.

She added that without these volunteers, the two-week period after the flood receded might not have been sufficient for her family to clean the house.

Honestly, she is very proud to be a UMP student.

For her, UMP is not only a reputable higher education institution but also attentive to the welfare of its citizens.

She also recounted anxious moments when her house was flooded to the waist level and that had affected the equipment in the house, and even her books could not be saved.

She said that the incident of rising water occurred at night very quickly.

“My family and I immediately left home to save ourselves.

“We were grateful that at that time, the path behind the house was still traversable towards the exit from the area.

“Indeed, the village is flooded almost every year, but I did not expect it to be this severe,” she said.

Meanwhile, a Diploma of Industrial Sciences student Muhammad Rasul Roslan, 19, was also delighted to receive a group of UMP volunteers to help clean the house due to the flooding.

“At first only my father and I were cleaning the house because my mother had to take care of my younger siblings, but not long afterwards I received a call from UMP who asked how I was doing and expressed their desire to help clean my house.

“I am very grateful to UMP who is concerned about the students’ welfare.

“The flood this time interfered a little with learning, as the books were damaged by the flood.

“However, I need to pick myself up and be resilient with this test,” he said.

UMP recorded 406 students and 275 staff members affected by the flood in the disaster that struck on 17 December.

The UMP Disaster Management Steering Committee has been mobilising volunteer operations from 21 to 31 December involving 22 locations around Kuantan, Temerloh, and Mentakab.

By: Nor Salwana Mohammad Idris, Corporate Communications Unit, The Office Of The Vice-Chancellor