What can we do in light of the Global Risks Report 2022’s ranking of the world’s greatest threats?

Risk analysis aids in the framing of decisions, predictions, and the identification of policy gaps that must be addressed. That is why, every January, the World Economic Forum releases the Global Risks Report, which sets the tone for the year.

In its 17th edition, the report pushes executives to go beyond the quarterly reporting cycle and develop policies that ‘link risk to strategy.’

In 2020, the previously speculative possibility of a pandemic became a reality.

Cyber threats hit new heights in 2021, with the average cost of a data breach reaching its highest level in over two decades. Simultaneously, the news was dominated by floods, fires, and weather-related tragedies. As a result, the climate continues to move from an abstract risk category to a category of imminent danger. 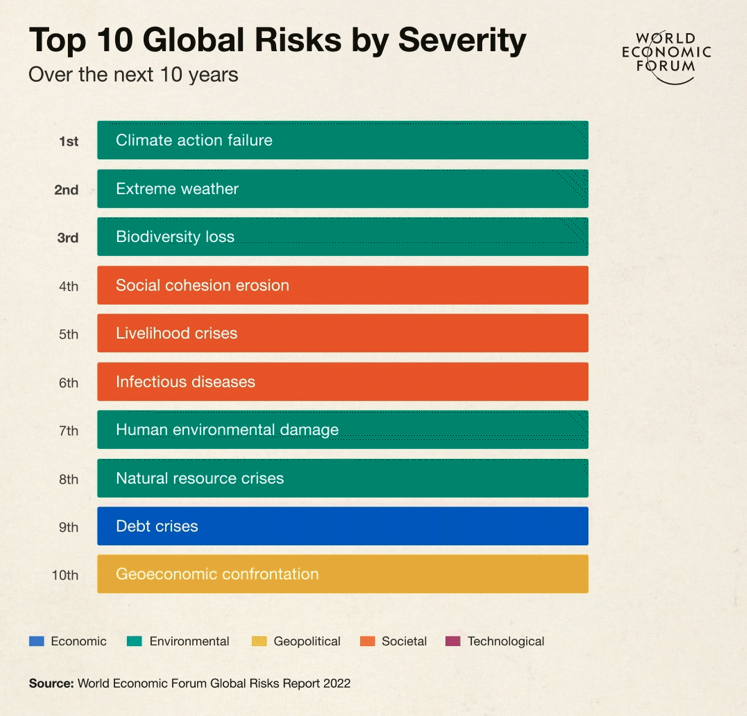 The epidemic has refocused attention on risk this year, and world leaders are more acutely aware of the ramifications of mismanaging public perceptions of risk.

The interconnection of dangers, ranging from climate concerns to cyber threats, becomes more apparent in light of the simultaneous crises during the epidemic. Alongside the health issue, economic troubles, environmental setbacks, cultural worries, and technological scares have vied for attention.

Youth are becoming more critical of government inactivity. Climate anxiety is evident in a study of 10,000 people between the ages of 16 and 25, with 75% of the respondents viewing the future as ‘frightening.’

Not only the young are concerned. A series of studies conducted throughout 2021 revealed growing concerns about personal health and safety, financial and health issues, and a lack of faith in governing institutions, among other things.

Also, according to a recent consumer index, there is a perception that individuals’ fragility has resulted in a ‘change from a more passive worry to active caretaking, motivated by the desire to preserve ourselves, our communities, and the planet’s security.’

The economic impact from the epidemic and divergent recovery rates continue to jeopardise collaboration on other global concerns, particularly when climate and environmental dangers are looming big.

Our increasing reliance on digital systems, which has increased exponentially over the last two years, has increased the hazards presented by digital or cybersecurity attacks.

Finally, the commercialisation of space threatens to have a ‘cascading effect’ on important services on Earth, as the chance of collisions between satellites and space trash increases.

Peter Giger, Group Chief Risk Officer of Zurich Insurance Group, said, “Humans are not excellent in a boiling frog situation, such as climate change; they are much better in a fight or flight scenario, such as the pandemic.”

And yet, in 2006, the Global Hazards Report issued a warning about pandemics and other health-related risks, warning that a ‘fatal flu, aided in its spread by global travel patterns and unchecked by poor warning measures, would pose an acute threat.’ In 2020, the world was unprepared.

Therefore, stakeholders should pay attention when Saadia Zahidi, Managing Director and Head of the World Economic Forum’s Centre for the New Society and Economy, called on leaders to ‘overcome our divides and work together to address long-term global threats.’

She cautioned that while ‘urgent concerns may restrict the attention and political capital that some countries globally will devote to longer-term issues,’ collaboration is necessary to end wars, protect refugees, and manage humanitarian catastrophes, among other obstacles.

Borge Brende, the President of the World Economic Forum, asked for a rapid and decisive mobilisation on the status of the world as the curtain rises on the Davos Agenda 2022. He served as a stark reminder that ‘our world is on fire and we must deal with it — this is a peril we are aware of; we are not confronted with a blind spot,’ and he advocated for ‘more private-public collaboration’ to solve inequalities and environmental concerns.

Finally, he advised that ‘risk reports indicate that the cost of inactivity significantly outweighs the cost of action’ and that, while ‘we’re heading in the right direction... we’re not moving fast enough.’

The writer is a Senior Lecturer at the Faculty of Chemical and Process Engineering Technology, Universiti Malaysia Pahang (UMP).