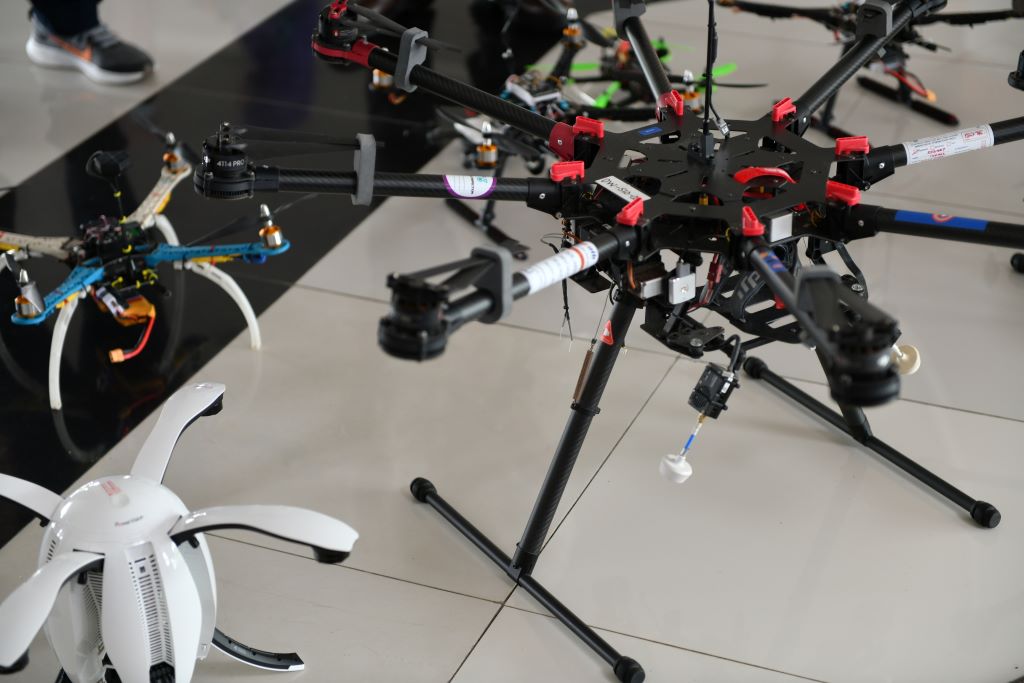 PEKAN, 12 May 2021 - Often we see many people fly drones not only as a hobby but for various purposes such as search and rescue, surveillance, monitoring traffic and weather conditions, fire-fighting and farming.

It is not surprising that they are willing to spend thousands of ringgit to buy drones to fulfil their needs and interests.

However, that is not the case for the staff of the Centre for Property Management and Development (PPPH), Universiti Malaysia Pahang (UMP), Zek Aman Abd Ghani, who serves as a driver.

He, who has had an inclination and passion for building drones for the past 8 years, produces over 50 drones in various sizes.

The drones he built can bear loads up to 15 kilogrammes.

According to him, “Actually, if we had a large budget, we could build a drone for even heavier weight.

“Alhamdulillah, for the past 5 years, I have received requests to produce drones for agricultural use for lifting goods, spraying pesticides and others.

“But at that time, not all the requests could be met because of the large budget needed to produce a drone,” he said.

Besides building drones, he is also skilled at operating drones in the air.

He said an important tip for flying drones is that we should be brave because the drones in the market are different from his creations.

“I will ensure that the drones can be operated well before handing it to the buyer.

“For hardcore users, they can know whether a drone is stable or not while in the air,” he said.

Talking about his experiences, he has also gained the title of Nail in the Sky (Paku di Langit) after being able to ‘tame’ flight controllers in the air by improving the configurations in the software and hardware in the past.

“The challenges early on in the drone production is when the drone we made crashed.

“For me, that is common in the early involvement in using a drone.

“But because I make the drones myself, it is not an obstacle for me to stay passionate about drones,” he said.

He will repair the drone and is always challenging himself by creating many types of drones.

His advice to drone enthusiasts who are new to or have had experience with drones for a while is to dare to try and never give up.

He said, “We fly them with confidence and follow the set rules.

“Have patience and keep at it. Even though it is costly, drones can be a source of income.

“If we are passionate about it, keep learning and do not be ashamed to ask those with more experience.

“We have to constantly learn, and I am always learning with the current fast-paced development in technology,” he said.

According to Zek, his deep passion for inventions and electric and electronics started when he was nine years old when he often saw his late father with the same interests.

The memory is fresh in his mind; he started learning about electrics from a book titled Asas Elektronik (Basics in Electronics) sold in a newspaper.

He said, at the time, there was no internet as a reference.

Only guided by the book and from there, his interest keeps growing with learning and practising fixing the electronic devices at home.

He, an alumnus of Sekolah Menengah Vokasional Kuantan, said after finishing his Sijil Pelajaran Malaysia (SPM), he was not able to continue studying at any higher education institute (IPT).

Yet without giving up, he started his career as a technician at a computer store.

His expertise in electronics made him a pro at repairing computers.

His keen interest in electronics gave him the chance to learn computer software and hardware with ease.

Not long afterwards, he was offered a position as a driver at UMP and at the time, Garmin GPS technology was becoming popular.

He was among the earliest to use the Garmin GPS apps to bring the staff to their desired destination.

“We indeed bought the apps, but it needs know-how about the software in use.

“Besides that, if the office has a computer problem, I would fix it without needing to send it to the Centre for Information and Communication Technology (PTMK) UMP,” he said.

He also extends his gratitude to UMP, who appreciates his skills by appointing him as an instructor in the students’ co-curricular activities through the UMP Talent programme to teach students interested in drones.

He is also often appointed to teach academics who are interested in learning about drones.