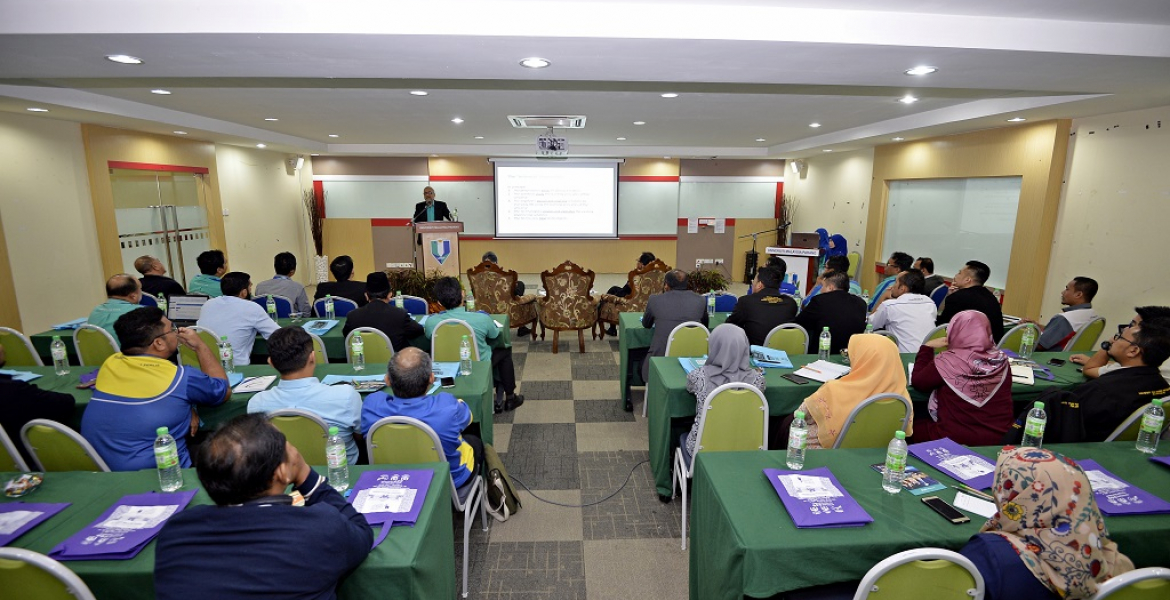 By: NUR SA'ADATUL AFZAN JUSOH, CORPORATE COMMUNICATION DIVISION
Universiti Malaysia Pahang (UMP) recently organised the Malaysia Technical University Network (MTUN) Academic Colloquium as part of the efforts to further enrich the eco-system of Technical and Vocational Education Training (TVET).
It was also in line with the Higher TVET agenda currently being mobilised in the country.
Acknowledgement by Ministry of Education on the fact that TVET was important and relevant allowed MTUN to plan various Higher TVET agendas that included the launching of Bachelor’s degree in Technology (B.Tech) on June 25, 2019.
The programme provides access for graduates to play their part in mobilising the country’s economy.
On the colloquium, it attracted 60 participants from UMP, Universiti Malaysia Perlis (UniMAP), Universiti Teknikal Malaysia Melaka (UTeM) and Universiti Tun Hussein Onn Malaysia (UTHM). It was held at Tun Fatimah Hall, UMP Gambang Campus on August 14, 2019.
The two-day colloquium discussed about TVET graduates’ direction, mobility and cooperation programme among MTUN, networking between the industries and MTUN, promotional activities to attract students to the programme and skills of lecturers and engineering trainers in the fields of engineering technology and TVET.
Also present at the colloquium were UMP Engineering Technology College, Senior Dean, Professor Abdullah Ibrahim, UTHM Engineering Technology Faculty Dean, Associate Professor Ts. Haji Amran Mohd Zaid and Programme Director, Dr. Azrina Abd Aziz from UMP Engineering Technology College.
In his speech, UMP Vice-Chancellor, Professor Ir. Dr. Wan Azhar Wan Yusoff said MTUN was responsible in ensuring the task given by the ministry and government was translated into the best action possible, through the implementation of strategies and initiatives that benefitted all parties with vested interests, stakeholders and targeted groups.
“In our efforts to strengthen the Higher TVET initiative, my view is that more engagements need to be done in order to gain more recognition and exposure for the programme, increase student intake and enhance public understanding.
“This is important in helping the government to position TVET in the right perspective and context as the catalyst of the country’s development,” he said during the official opening of the colloquium.
He also delivered a keynote address titled, ‘Foresight of Engineering Technologist’.
He added that the synergy of the four MTUN universities in the context of Higher TVET was very important at a time when the government was in the midst of finalising the 12th Malaysian Plan.
“In fact, MTUN’s role in the context of Higher TVET is indeed relevant in leading Malaysia towards greater growth in economy, migrating from labour-intensive economy to a more futuristic economy based on technology, automation and intellect economy (K-economy).
“This is in line with the government’s move to achieve sustainable development by the year 2030,” he added
Another speaker at the colloquium, Associate Professor Ir. Adnan Zulkiple who presented a paper titled, ‘Pathway of Engineering Technologist and Engineering Technician’, explained the difference in the route of career between an engineering technologist and an engineering technician.
He added that both branches of the engineering field had been accepted by the Malaysia Board of Engineers.
He also said under the MTUN Bachelor’s Degree programme, universities would produce graduates who were competent in theory and practical aspects as well as skills.