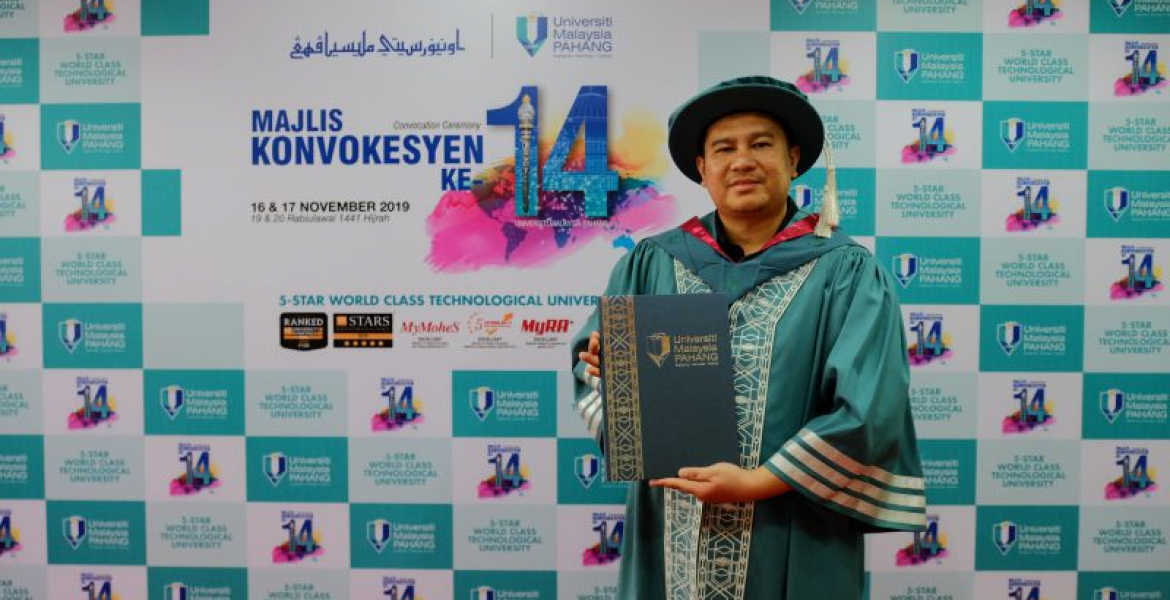 The South China Sea is not an obstacle for Dr. Mohd. Hafizil

Ts. Dr. Mohd Hafizil Mat Yasin might have to deal with travelling for thousands of miles from Peninsular Malaysia and separated from his loved ones before he could complete his doctorate degree in mechanical engineering (fuel combustion), done on a part-time basis, at the Faculty of Mechanical and Automotive Engineering in Universiti Malaysia Pahang (UMP).

The distance was never an obstacle for him.

Dr. Mohd Hafizil who worked as a lecturer in Terengganu was initially reluctant to be based in Kota Kinabalu but he still went to the city, complying with the order for the transfer.

His academic story did not end there as he then registered as a post-graduate student at the end of 2014.

A firm believer in this philosophy, ‘It doesn’t matter where you come from, what does matter is YOU’, Dr. Mohd Hafizil remained focus in his four-year study in UMP.

He also received strong support from his family.

“I would be lying to say that everything was a bed of roses as there some bumps along the way especially upon learning that I failed to obtain the Federal Training Prize (HLP) from the Ministry of Education despite passing the interview stage,” he said.

However, the eldest of his siblings, Dr. Mohd Hafizil said he rose to the occasion and continued his studies although he had to do so on his own expenses.

His patience and perseverance paid off and he got the Lecturer Industrial Attachment (SIP) offer as research assistant in a company in Kota Kinabalu which gave him the opportunity to design his own engine test rig for fuel testing.

On choosing UMP as the university to do his doctorate degree, Dr. Mohd Hafizil said UMP was a university under the Malaysia Technical University Network (MTUN) that had its own mission and vision to meet the requirements in the fields of science, management and technical.

He added that the university had a capable staff and good infrastructure as well as collaborations with world-class companies and institutions to meet current needs and that of the local communities.

Dr. Mohd. Hafizil had also completed his master’s degree programme in mechanical engineering which he did on a part-time basis in UMP.