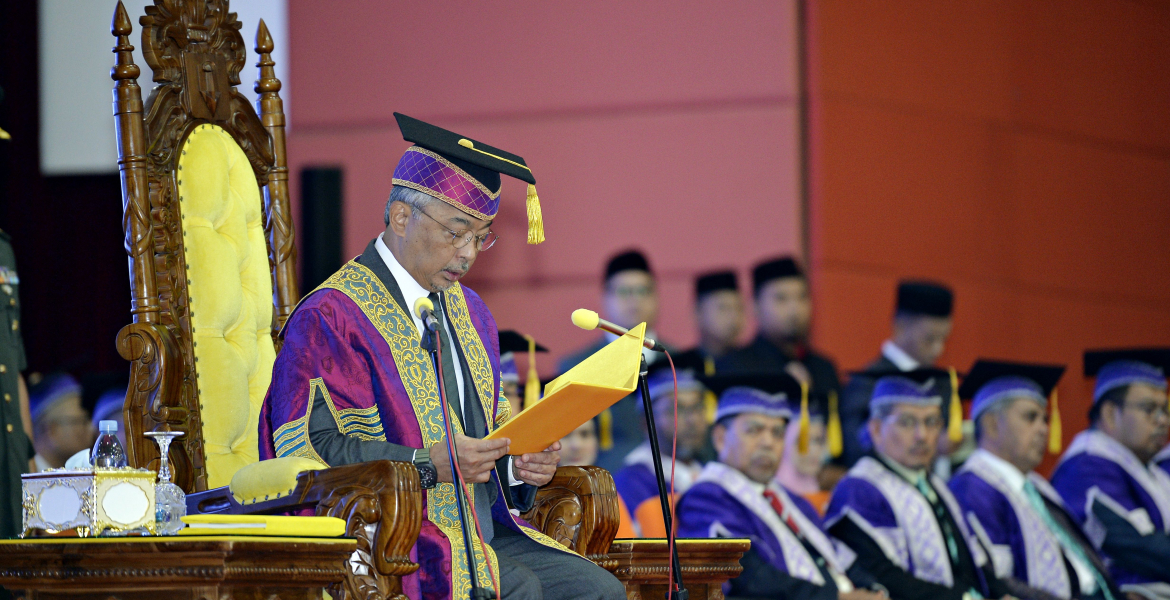 In his royal address at the recent UMP’s 14th convocation – held at the Sports Complex of the university’s Gambang Campus on November 16, 2019 – His Majesty also called on the university to move rapidly forward and ensure the success of the Technical and Vocational Education and Training (TVET) programmes, in line with Malaysia’s present aspiration on higher learning.

His Majesty Al-Sultan Abdullah said he believed these two focus areas will elevate the country to a higher level, and sincerely hoped that UMP will continue to shoulder such national agenda to fruition.

“The close-knit collaborations between UMP and the industrial sectors, both domestically and globally, will certainly strengthen the university’s fundamental role in producing highly capable human capital to meet the country’s employment demand, and even for the international level as well,” he added.

His Majesty Al-Sultan Abdullah complimented the university’s administrative team on their plan to establish ‘Yayasan UMP’ early next year, as part of the latter’s efforts to pool fund in order to help the less fortunate gain access and opportunities to finance their pursuit of tertiary education.

“This is truly hailed as a noble effort and should garner full support from all parties involved. Notwithstanding, UMP should not depend too much on endowments in its drive for excellence.

“Instead, the university should continue to identify new strategic business partners in its efforts to boost UMP’s capabilities in competing with other universities,” stressed the Chancellor.

Turning his royal address to the graduates, His Majesty Al-Sultan Abdullah advised them to utilize the knowledge and experience gained at the university for the benefit of the masses.

He also expressed his hopes that the graduates will tirelessly explore other opportunities that will lead them to bigger success in the future.

He stressed that aside from being responsible citizens who can contribute to the prosperity of the nation, the graduates actually shoulder a bigger responsibility in shaping the future direction of the country and its people – they will be the new line-up of leaders.

Speaking of leadership role, His Majesty Al-Sultan Abdullah congratulated his son, the Crown Prince of Pahang, Tengku Hassanal Ibrahim Alam Shah, who had just been appointed his deputy and UMP’s Pro-Chancellor, along with Chairman of Heitech Padu Bhd, Tan Sri Abi Musa Asa’ari Mohamed Nor.

The installation ceremony for Tengku Hassanal as the Pro-Chancellor will be held at a later date as his royal highness is still attending to his studies at The Royal Military Academy Sandhurst in the United Kingdom.

UMP’s two-day 14th Convocation saw some 3,782 graduates took to the stage to collect their scrolls – of which 2,633 completed their Bachelor’s Degree; 77 for Doctors of Philosophy; 158 for Master’s Degree; and 914 for Diploma under the executive and professional programmes conducted by the Lifelong Learning Centre of UMP Advanced Education.