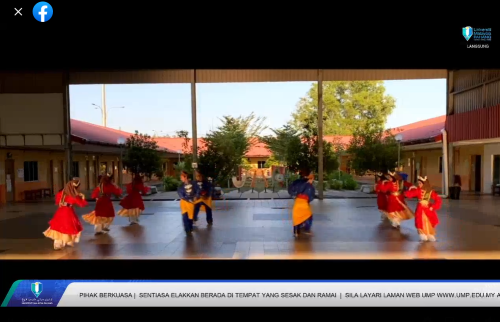 PEKAN, 11 April 2021 – The Dance Art Festival (FESERI), Universiti Malaysia Pahang (UMP), finally drew its curtains in an online event recently after being postponed several times due to the Covid-19 pandemic.
The program was organised by the UMP Culture and Arts Secretariat in collaboration with the Student Affairs and Alumni Department, Centre for Sports and Culture, Students’ Representative Council (MPP), Universiti Malaysia Pahang Orchestra (UMPO) and Anak Pahang Student Secretariat (SEMAMPAN).
FESERI is one of the high impact programmes to foster the spirit of patriotism and identity among students.
FESERI is seen to be producing the best artwork through healthy competition by various levels of education in Malaysia, namely from primary schools, secondary schools and institutions of higher learning (IHLs).
The programme was virtually held with the concept of competition at the state and national levels through the live broadcast of UMP Centre for Culture’s Facebook page and UMP Malaysia’s YouTube channel.
Each participant has to submit a video of their group’s dance on the specified date.
The video of each participant was shown in three stages, starting from primary schools, secondary schools and IHLs.
In this competition, the Artistic Director of Choreoarts Studio, Khairul Anuar Zainudin and part-time lecturer at the National Academy of Arts Culture and Heritage (ASWARA), Al Jabar Laura, were appointed as the judges.
Meanwhile, the supervising teacher of Sekolah Kebangsaan Pekan Jaya, Rozaidah A. Rahman, was honoured that the school students were given the opportunity to perform on a prestigious platform such as FESERI.
She said one of the highest challenges was training time and honing the new talents after the programme was postponed three times due to the pandemic and students who were ready last year had entered secondary schools.
“I strongly support and am grateful for UMP’s initiative to organise a festival like this in revitalising the art of dance at various levels.
“Although the organisation of FESERI was constrained by the current situation in the country, UMP executed it so well and professionally,” she said, hoping that FESERI can be organised next year.
The Programme Director, Agha Khilfi Suarno, a second-year student from the Faculty of Manufacturing and Mechatronics Engineering (FTKPM), expressed his gratitude to Allah SWT to be able to face various challenges throughout the programme adapted to the new norms.
His team was delighted to see their efforts and hard work at the level of FESERI UMP committee members received an outstanding commitment.
For him, the biggest challenge in managing and operating this programme was managing the time between study, programme preparation and MPP commitment.
He hopes that UMP can match and become a university with the best programmes based on arts and cultural activities in line with the best universities in Malaysia.
In addition, FESERI will be a good branding to the identity of UMP because they plan to make FESERI an annual programme because of the high response from participants and schools from other states.
FESERI is expected to be a stepping stone for UMP students to be more courageous in implementing programmes, especially in the new norms and bringing the good name of UMP to greater heights.
The competition saw Sekolah Kebangsaan Pekan Jaya, Pekan, which was announced as the primary school category champion and received the Best Choreography Award.
The runner-up was won by Sekolah Kebangsaan Bukit Setongkol, Kuantan and they also won the Best Costume and Makeup Award followed by Sekolah Kebangsaan Seri Biram, Pekan in the third place.
For the secondary school category, the winner and the Best Choreography Award went to Sekolah Menengah Kebangsaan Tengku Afzan, Kuantan.
The runner-up and the Best Costume and Makeup Award went to Sekolah Menengah Kebangsaan Beserah, Kuantan while Sekolah Menengah Kebangsaan Lepar bagged the third place.
The first place and Best Choreography Award at the IPT level were won by Universiti Teknologi MARA (UiTM) Shah Alam, and UMP won second place and the Best Costume and Makeup Award.
FESERI Glorious Night was also jazzed up with the performance of a famous artist, Haqiem Rusli, who sang four songs.
By: Siti Nurfarmy Ibrahim, Corporate Communications Unit, The Office of The Vice-Chancellor And Noor Afiza Mohd Asmi, Centre for Sports and Culture.
Translation by: Dr. Rozaimi Abu Samah, Engineering College/Faculty of Chemical and Process Engineering Technology