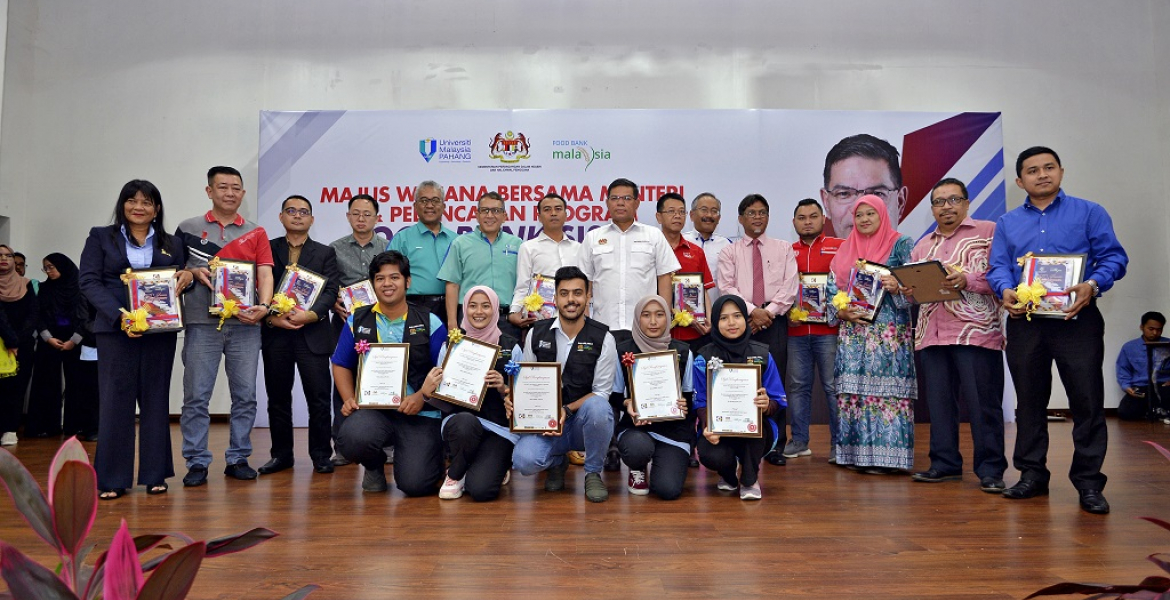 Universiti Malaysia Pahang (UMP)’s Food Bank for Undergraduate initiative, aimed at helping to ease the cost of living incurred by students in campus as well as those outside of the campus had been well-received.
The initiative was carried out by volunteers using the Food Pantry concept.
It was officially launched by Minister of Domestic Trade and Consumer Affairs, Datuk Seri Saifuddin Nasution Ismail, in conjunction with a dialogue session held with the minister at Astaka Hall, UMP Gambang Campus on October 16, 2019.
Also present at the launching were the ministry’s Deputy Secretary General, Datuk Rostam Affendi Dato’ Salleh, UMP Deputy Vice-Chancellor (Student Affairs and Alumni), Professor Dato’ Dr. Yuserrie Zainuddin, UMP Board of Directors’ member, Professor Dato’ Dr. Rosli Mohd. Yunus and Food Bank Malaysia Foundation Chief Executive Officer, Abd. Wahab Long.
The programme was launched in 17 public universities and UMP was the 18th university to have a Food Bank.
To date, a total of 6,570 students from the public universities have benefitted from the programme including 1,400 in UMP.
Among the sponsors that contributed to the programme were Tunas Manja Group, 99 Speedmart Sdn. Bhd., Adabi Kuantan Distribution Sdn. Bhd., Palma Unggul Enterprise, Hock Ho Hiap Kee Oil Mill Sdn. Bhd., Nurfirman Sdn. Bhd., Nirwana Group,  Gardenia Bakeries (KL) Sdn. Bhd., Legasi Z Sufi Marketing and Syarikat Gean Ming Sdn. Bhd.
In his speech, Datuk Seri Saifuddin said the ministry, through the foundation, had taken steps to connect the industries, such as supermarket owners, food manufacturers, restaurants and hotels, with universities in channelling food aids.
He also said the running of the food bank initiative was based on a concept ‘From the Undergraduate to the Undergraduate’.
“We welcome university students to participate in the initiative especially student bodies, so we can together help those who are in need,” he added.
Professor Dato’ Dr. Yuserrie Zainuddin also said the university had developed UMP Campus Pantry Portal, which was entirely done by the students themselves, so those interested could get the latest information about the programme.
“It will also facilitate the public or alumni to make contributions, in cash or food.
“To date, a total of 1,400 students under the B40 category have benefitted from the Campus Pantry aimed at helping to reduce their cost of living, especially so towards the end of the semester.
“Since its inception, various activities have been organised to fill UMP Campus Pantry such as a charity sale where new clothes as well as second hand clothes which are still in good condition are sold with the lowest price fixed at RM1.
“All the proceeds were channelled to the Campus Pantry,” he added.
“Another means of filling the coffers was by encouraging staff to make salary deduction as an incentive of contribution to MyGift fund or UMP Foundation,” he said.
UMP had also implemented several of its own meal programmes such as the ‘Food for All’ where free meals were provided at the mosque from Monday to Friday (morning) and every Monday and Thursday for breaking of fast (iftar jamaie) at UMP Mosque and the ‘Projek Kongsi Rezeki’ (Sharing of Sustenance) where students could get their lunches at RM1.
The ministry and foundation welcomed participation from various parties for the programme in a move to reduce surplus of food and to help the needy.
They also believed that volunteerism could be instilled through this programme and hoped that the initiative could be extended to 123 other locations including private institutes of higher learning, university colleges, teachers’ training colleges and polytechnics.