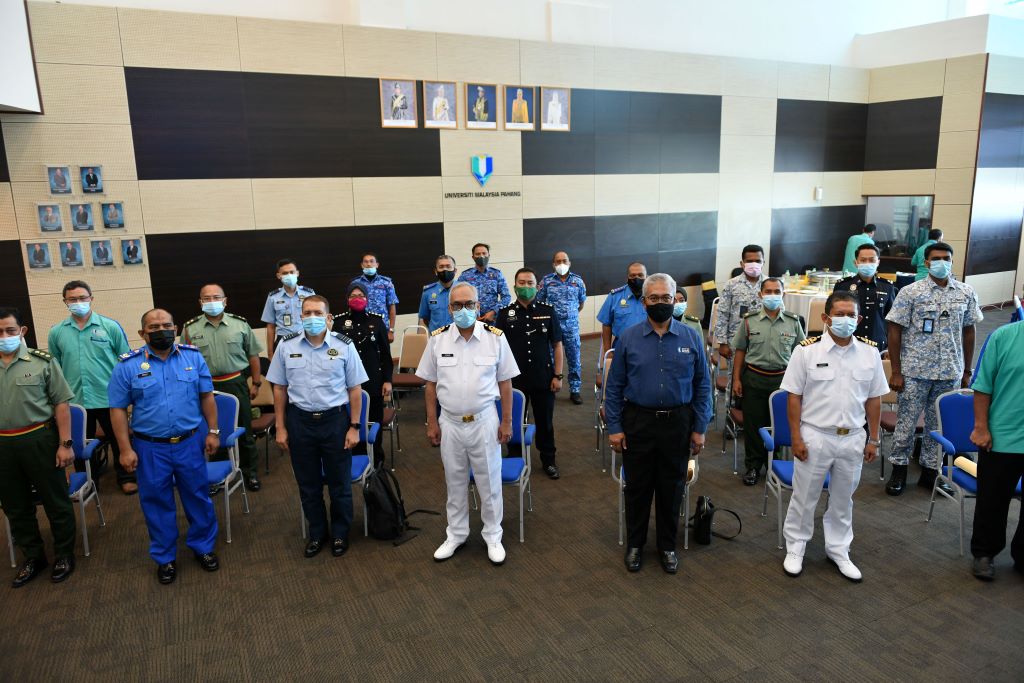 PEKAN, 8 March 2021 - The participation of students in the national security volunteer team has greatly contributed to the increase in graduate employability.
According to Captain (K) Professor Ir. Dr. Wan Azhar Wan Yusoff, the Commander of the Reserve Officer Training Unit (ROTU or PALAPES), most of them are stationed in strategic or formation units of a technical nature.
He who is also the Vice-Chancellor of Universiti Malaysia Pahang (UMP) spoke at the Meeting with the UMP Uniformed Bodies at the Banquet Hall of Tun Abdul Razak Chancellery, UMP Pekan recently.
He said the role of uniformed bodies in the university is crucial because it is one of the entities that conduct training and co-curricular activities through outdoor and experiential learning methods in developing students’ personality.
“I hope these uniformed bodies will be the largest group that contributes in a volunteer team that is ready to be mobilised at any time in various fields when the country is hit by a disaster or calamity.
“They also play a role in helping the physical development of the university, helping peers and always ensuring the safety of the campus,” he said.
He was also informed that since 2015, the Royal Malaysia Police (PDRM) has carried out special recruitment exercises for students who have completed training in the Police Undergraduate Voluntary Corps (SUKSIS).
“This special recruitment exercise has recognised and created great opportunities for our students who have been successfully appointed as Volunteer Inspectors after completing their training at the university,” he said.
“In fact, the compulsory training period that they pass while at the Police Training College is also shorter, which is only for three months compared to nine months for public recruitment.
“Although the recruitment through this special route is not implemented in the Malaysian Armed Forces (ATM), the university is informed that the candidates who have been certified as Junior Lieutenants during their studies are the candidates of choice for the ATM selection panel,” he said.
He said this is also a merit for university graduates during the recruitment process of the Officer Cadet.
“Therefore, the contribution and existence of each uniformed body in UMP is very significant as one of the opportunities to market university graduates.
“UMP also does not prevent students from returning to campus if they need to undergo physical training but they must always follow the standard operating procedures (SOP),” he said.
The Director of the UMP Co-Curriculum Centre, Ts. Dr. Siti Rabiatull Aisha Idris said, “There are five uniformed bodies, namely Army, Navy and Airforce PALAPES; Police Undergraduate Voluntary Corps (SUKSIS) and Malaysia Civil Defence Force (APM) which has 529 cadet officers at the university to date.”
There was also a presentation on the implementation of military training and activity planning that will be carried out this year for each uniformed body.
Also present was the Lieutenant Colonel Professor Dato’ Dr. Rosli Yunus, Deputy Commander of UMP Airforce PALAPES who is also a Member of the University Board of Directors and Lieutenant Commander Professor Dato’ Ts. Dr. Yuserrie Zainuddin, Commander of the UMP Police Undergraduate Voluntary Corps (SUKSIS) who is also the Deputy Vice-Chancellor (Student Affairs & Alumni).
Also present was the Assistant Commissioner Professor Ts. Dr. Rosli Hainin, Commander of the UMP Civil Defence Student Corps (SISPA) who is also the Deputy Vice-Chancellor (Academic and International), Lieutenant Commander Zainuddin Othman, Honorary Commander UMP Navy PALAPES who is also the UMP Treasurer.