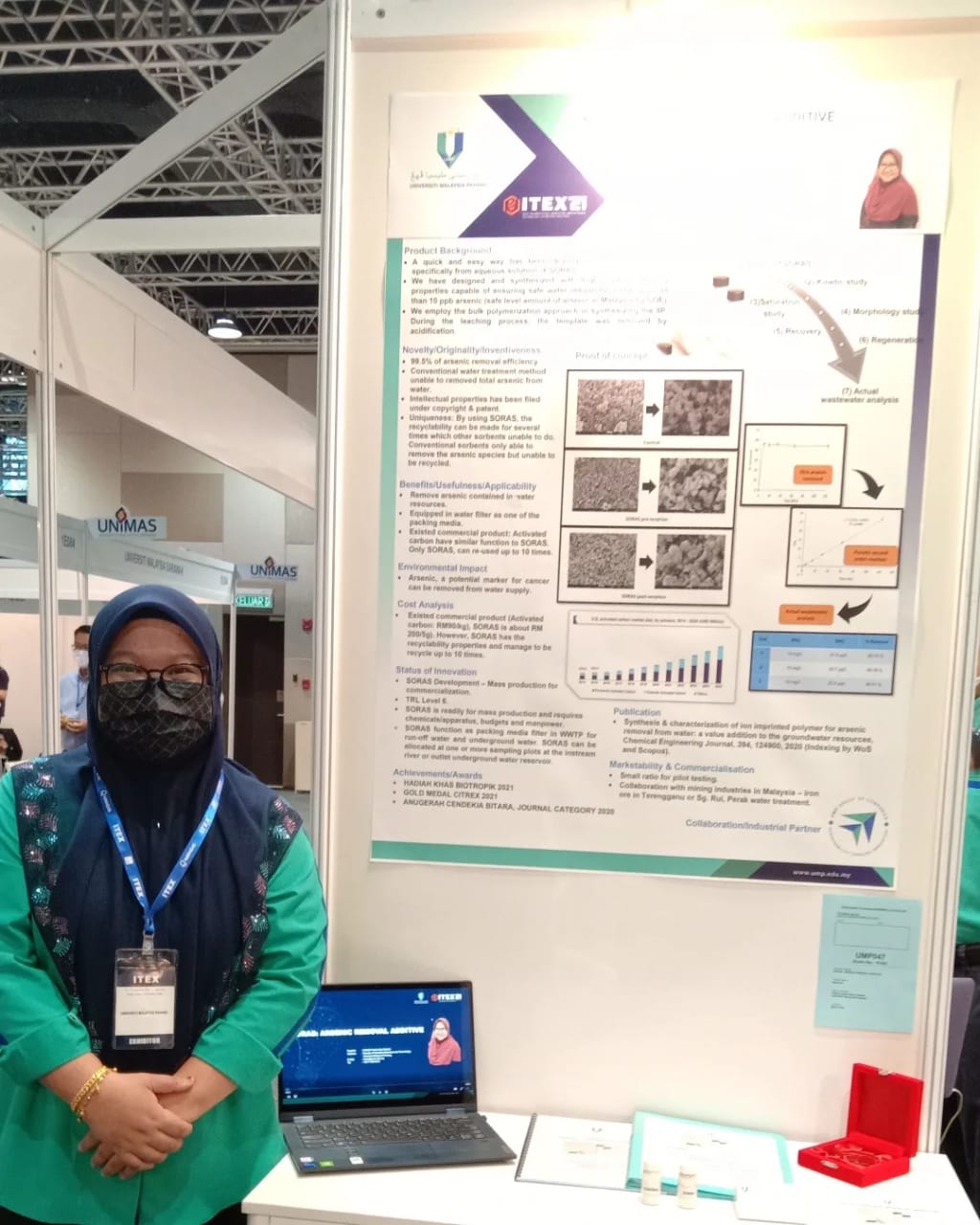 PEKAN, 5 July 2022 – Water pollution especially from landfills often contains toxic and carcinogenic substances that are harmful to health in the long run.

Looking at this problem, a lecturer from the Faculty of Industrial Sciences and Technology (FSTI), Universiti Malaysia Pahang (UMP), ChM Dr. Nurlin Abu Samah, 38, came out with a product capable of making an impact in removing arsenic in contaminated water.

A product named SORAS is an adsorbent used to remove arsenic in contaminated water.

According to her, SORAS is the combination of sorbent and the symbol As for arsenic in the periodic table.

“By using this product, the percentage of arsenic removal is very high, almost 99.5% on average.

“The advantage of this product is that SORAS is recyclable and can save on production cost.

“This research started in 2017 and was completed in 2019 with funds raised from UMP internal grant and conducted together with the lecturer of the Faculty of Science Technology, Universiti Kebangsaan Malaysia (UKM), Professor Dr. Yang Farina Abdul Aziz,” she said.

She said that the idea for this study began during her PhD study in Spain and was developed according to the suitability of the problem in Malaysia.

“SORAS is a substance synthesised in the laboratory using bulk polymerisation method.

“It has the advantage of being an activated substance on the cross-linked polymer that contains parts of the amino group from the thiourea group which plays a vital role in the formation and dissociation of the hydrogen bonds between SORAS and arsenic in the water sample.

“In addition, the nature of SORAS, which has an arsenic ion template imprinted on the cross-linked polymer, causes the adsorption process to occur faster in less than five minutes with almost 90% arsenic being removed from the water sample,” she added.

She added that this research outcome could solve the problem of using activated carbon in sewage treatment plants, which is less efficient in removing arsenic in water.

“Recent studies have shown that the presence of arsenic in the Sungai Langat Basin has been reported due to changes in the landscape, former mining sites and the widespread use of pesticides.

“SORAS can be used in a two-layer water filtration system as suggested by previous studies to obtain arsenic-free water source.

“For now, the planning is more towards developing a water filtration system prototype equipped with SORAS,” she said.

She also hoped that with this water filtration system, arsenic content in contaminated water could be reduced, improving the community’s quality of life that is free from any diseases caused by arsenic such as skin cancer.

In the future, SORAS is expected to be added to the water filtration system and could be produced in large quantities; however, it requires funds to carry out SORAS synthesis work.

“For now, SORAS still does not involve any agency.

“However, for those who are interested, SORAS can be obtained at an optimal price of RM50 per gram,’ she said.

In addition, this research received recognition at the UMP Cendekia Bitara Award 2020 for the journal category through a publication titled Synthesis and Characterization of Ion Imprinted Polymer for Arsenic Removal from Water: A Value Addition to The Groundwater Resources published by Chemical Engineering Journal, which has an impact factor of 13,273.

At the International Invention, Innovation and Technology Exhibition (ITEX) 2021, held at Kuala Lumpur Convention Centre from 13 to 14 December 2021, this research bagged a silver medal.