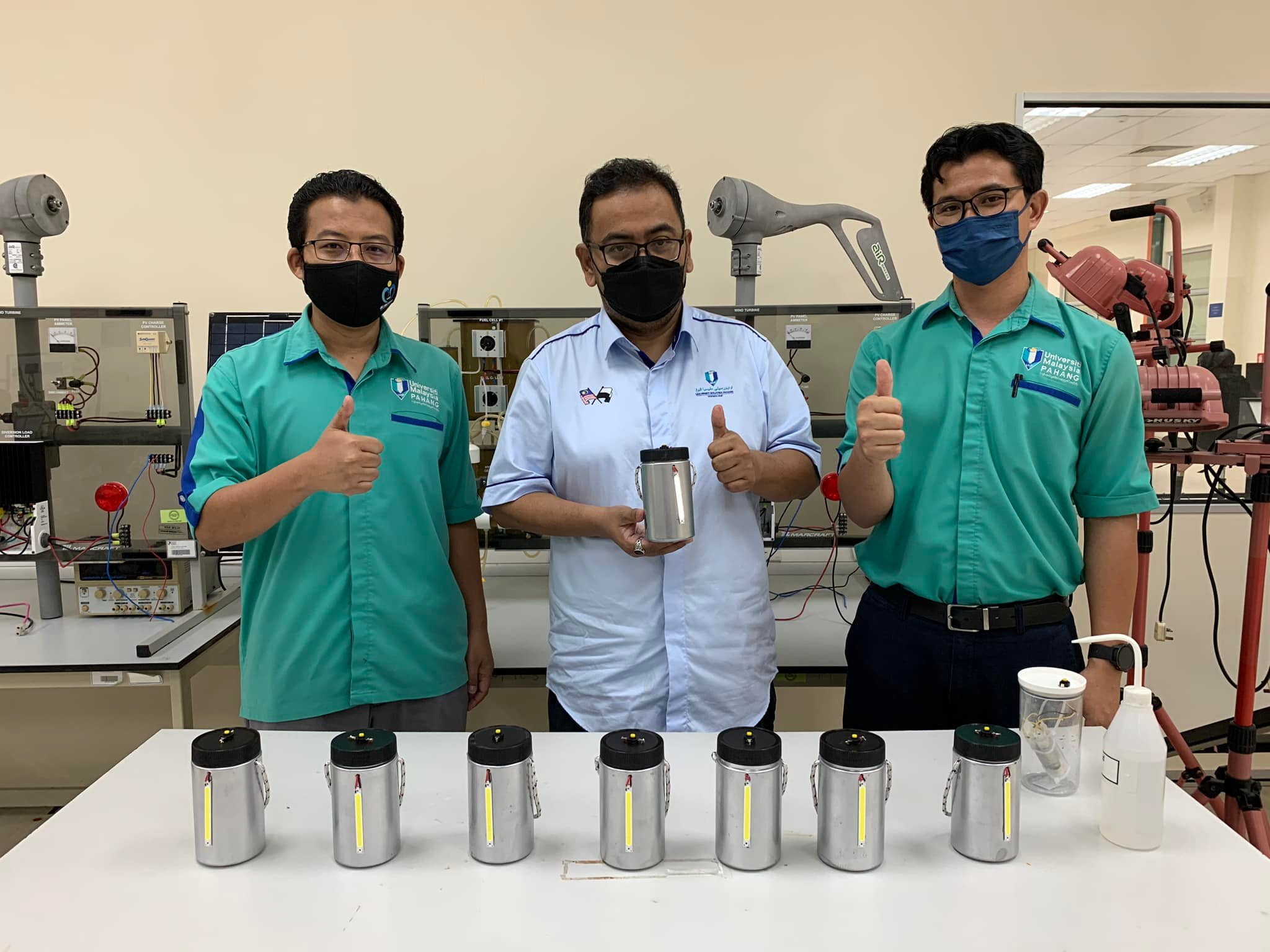 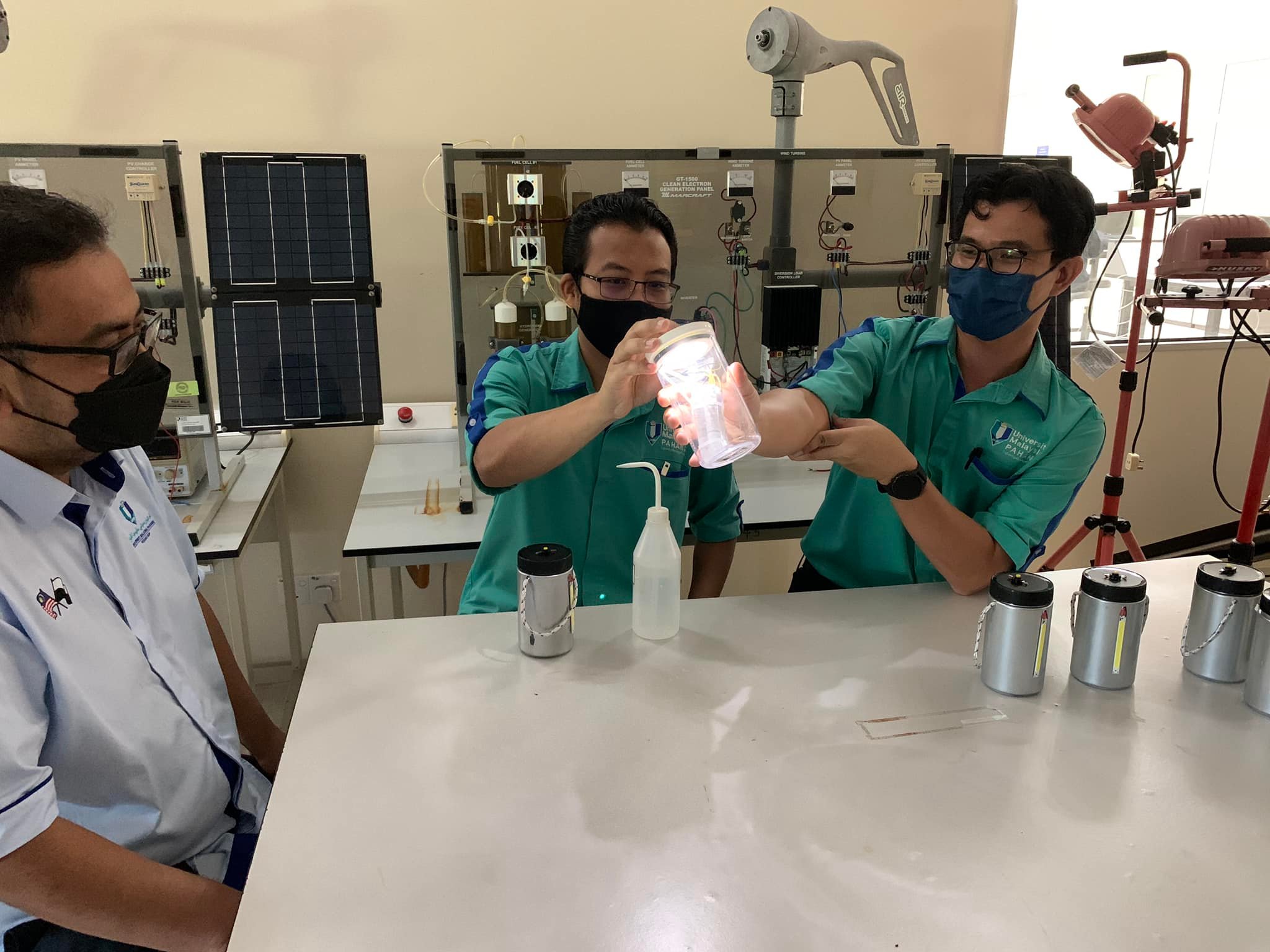 PEKAN, 9 May 2022 – The tradition of putting up lights or lamps when Ramadan begins to approach its final days has become a tradition of the Malay community in Malaysia.

Usually, oil lamps or panjut are put up around the house to enliven the house and its surrounding, especially during 27 Ramadan.

They used to put up kerosene lamps, and now some use electric or solar lamps.

However, a group of UMP researchers has innovated portable lights using seawater electrolytes as the UMP campus in Pekan is close to the beach.

“This device is named Sea-Lite, referring to the sea, which gives light (or lite), and it has a compact design and is easy to carry and maintain.

“It can also supply light and electricity and can last for a long period,” he said.

He said the Sea-Lite innovation had started in March 2022 and the prototype was successfully completed by mid-April 2022.

“The initial design of this device used materials found in the laboratory.

“In addition, the production of Sea-Lite electrodes also used recycled materials from the building renovation work at UMP.

Commenting further, Dr. Izan said Sea-Lite works through an ion reaction from seawater with electrodes, producing electricity capable of turning on the lights.

“Currently, the initial prototype can produce electricity consistently for up to seven days and this technology can also be used in areas with no electricity supply.

“In addition, this is a green technology and safe to use.

“Sea-Lite can also work by using table salt to replace seawater,” he said.

Sea-Lite aims several target groups for the use of this product, among which it is suitable for use in place of lamps for festive celebrations, especially for those who live in high-rise buildings.

It does not produce carbon as a by-product and the risk of fire can also be avoided.

It is also suitable for those passionate about outdoor activities such as camping, hiking, jungle trekking, fishing and cycling.

The compact and easy-to-carry form of Sea-Lite can provide convenience to the users.

In addition, it can be used as a preparation for natural disasters such as flood and in the absence of electricity.

It can also be used by rescue forces such as the army, the General Operations Force (PGA) and civil defence which requires them to be in a remote place for a long time.

He hoped that Sea-Lite would be produced with electrodes with better durability and thus have a longer lifespan.

Moreover, it will also be equipped with USB charging features. 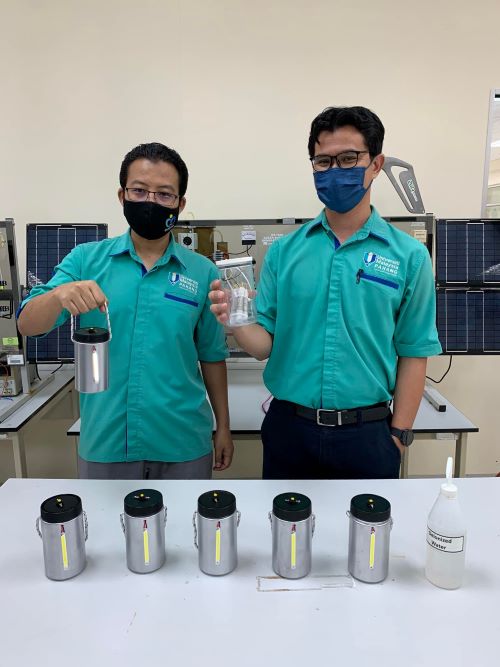 Sea-Lite also uses the concept of a metal-air battery.

It can provide energy and power density comparable to that of lithium ion batteries and can be extended for high-performance applications such as batteries for electric vehicles.

More interestingly, Sea-Lite were also installed during the Fast Breaking Ceremony with His Majesty the Yang di-Pertuan Agong at Padang MBK, Kuantan to enliven the area which is the focus of visitors to break their fast during Ramadan.

This initiative supports the Pahang State Government’s campaign to make the Kuantan City a low-carbon city in line with Malaysia as a carbon-neutral nation by 2050, as announced by Malaysia’s Prime Minister, Datuk Seri Ismail Sabri Yaakob.