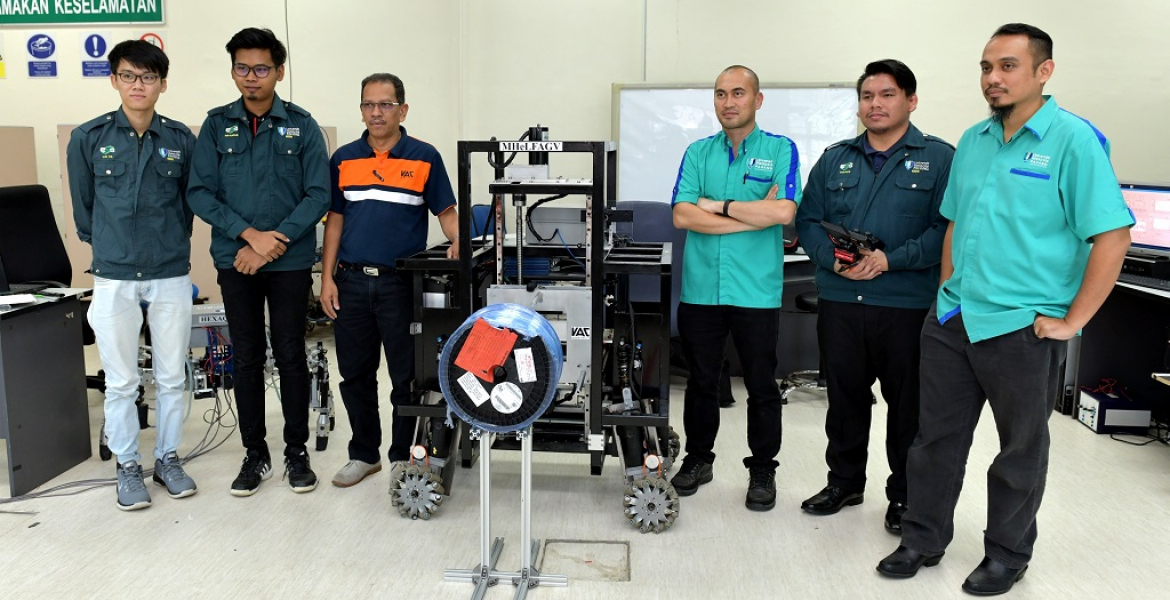 Concerned over problems faced by the industries relating to material handling equipment, a group of University Malaysia Pahang (UMP) researchers came up with a vehicle that could lift steel roll, weighing between 50kg and 60kg, from a relatively narrow factory store to the inspection room in not more than 20 minutes.

The right type of forklift is used to lift heavy loads but normally, the size is rather bulky and unsuitable to lift loads into storage area with small and limited space.

Lead researcher and lecturer with Faculty of Electrical & Electronics Engineering (FKEE), Ir. Dr. Addie Irawan Hashim said the idea for the product came up when Vacuumschmelze (M) Sdn. Bhd. (VAC) invited him to work together to solve problems faced the company.

“It started with a discussion and it led to the development of MHeLFAGV that met the industrial requirements of the company.

“Research on the product began in 2014 and it was carried out together with my colleague, Ir. Dr. Akhtar Razul.

“The idea for the vehicle was mooted by VAC General Manager, Mohd Arif Zakaria. It was completed last year,” said Ir. Dr. Addie, who hailed from Pahang.

He added that the vehicle was designed using the ‘pick-and-swallow’ mechanism that involved the heavy steel roll lifted into the machine before it was moved to the designated location.

“This is to ensure balance when moving the load. It is different as compared to the other common forklifts found in the market.

“It also used the omni tyre that allows the machine to move in all directions and make turns without taking too much space, especially when making turns to enter into an aisle,” he said.

He said MHeLFAGV was easy to handle in a tight space with less possibility of accidents occurring such as scuffing the wall or getting stuck.

He hoped that the company would find the equipment working to their likings and meet their industrial needs that involved a lot of lifting of steel rolls and that this would result in better and smoother work flow in the workplace located in Pekan.

“At the same time, both parties have plans to obtain more funds so MHeLFAGV can functioned more effectively. Its function can be further improved by making it more automated.

“The plan is to speed up the lifting process by using the automatic system based on image processing and artificial intelligence, including having a unique mechanical mechanism.

“We also plan to further improve the robotic design, expand it and market it for other transportation applications and tweaked it so it can used in various versions,” he added.