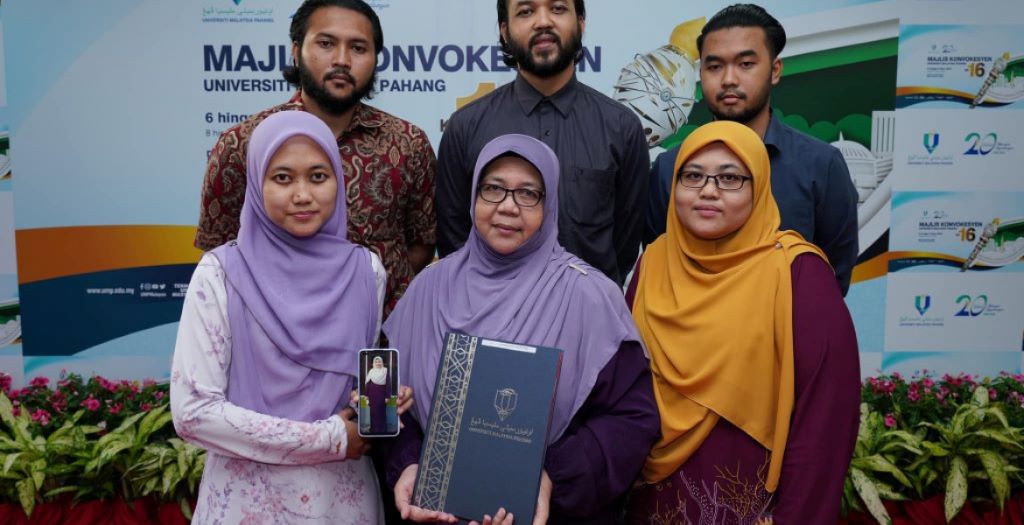 Mother walks across the stage, Amira did not make it to convocation ceremony

KUANTAN, 6 August 2022 - “It is hard to go to this Convocation Ceremony and I want to stay home when I think about her.

“But after being persuaded by my daughter, Maidatul Nadia, I gathered my strength to come,” said Nor Fariza Ismail, mother of a Universiti Malaysia Pahang (UMP) student who died on 4 February 2022 from a lung infection.

Fariza still remembers the late Siti Amira Muhada told her that she wanted to recover quickly and attend the convocation ceremony.

“Apparently she did not manage to walk across the stage to receive the scroll and I have to receive it,” she said.

Nor Fariza, who is a housewife, said the loss of the late Amira was a surprise after the loss of her husband, Alias Yusof in October 2021 due to COVID-19.

Losing two loved ones in such a short time was devastating for her.

“Shortly after my husband’s passing, Amira was often unwell that she could not swallow food properly.

“At first, I thought she had a fever because she missed her father.

“However, day by day, her condition worsened until she was bedridden and unable to manage herself without help,” she said.

She said that Amira also often sought treatment in the hospital in Terengganu.

Her mother and sister, Maidatul Nadia, often took Amira to the hospital.

“There was one time Amira suddenly woke up and said she needed to get well soon so she could attend the convocation ceremony.

“We were all surprised and thought she would recover, but these are all Allah’s will, I accept that,” she said, accepting the scroll of her daughter delivered by the UMP Pro-Chancellor, Tan Sri Dato’ Sri (Dr.) Abi Musa Asa’ari Mohamed Nor on the first day of the UMP 16th Convocation Ceremony at UMP Gambang Campus.

Although her daughter was gone and did not enjoy this convocation moment, she was very moved by her success in obtaining the Bachelor of Industrial Technology Management with Honours.

Meanwhile, according to her sister, Maidatul Nadia, there was a WhatsApp conversation between Amira and her friends showing that the excitement to attend the convocation ceremony did not mean anything to her because her farther was not around to witness her success.

“It is sad thinking about that, but I need to be stronger to continue taking care of my mother and sister.

“We will keep all this as a memory and encouragement to the youngest sister who is still studying.

“On behalf of my family, I would like to thank the lecturers and her friends throughout her study at UMP,” she said, attending the ceremony with other siblings.