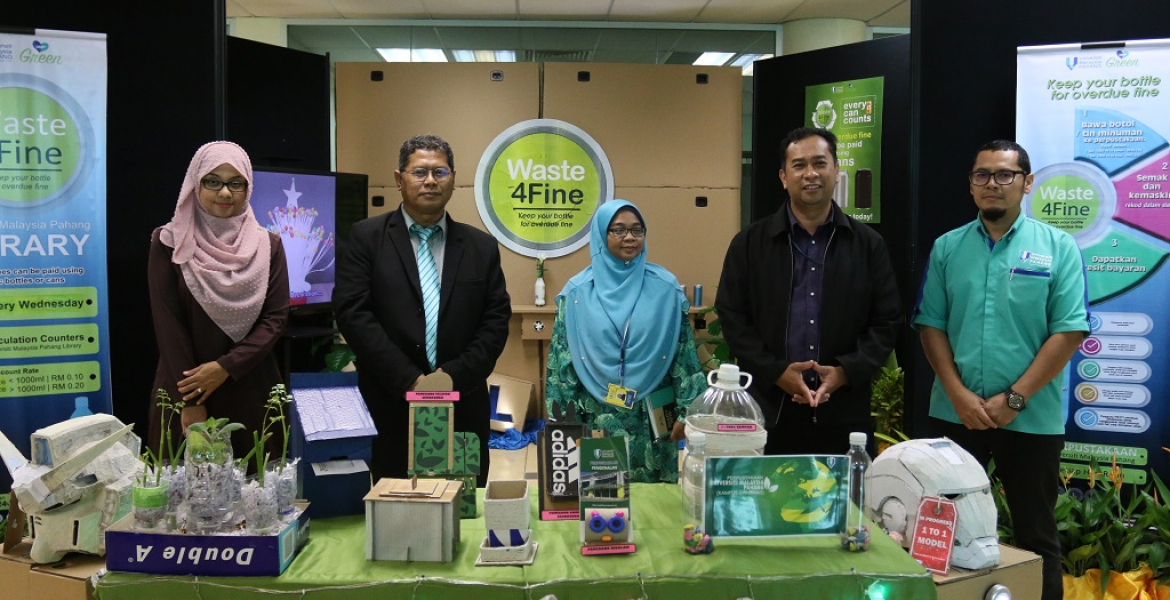 Universiti Malaysia Pahang (UMP) Library has introduced an ingenious way as part of its efforts to support the university’s green campaign – by making students pay their fines for late return of library books with plastic drinking bottles or canned drinks.

The programme, Waste4Fine, is an initiative that supports UMP’s implementation of green practices towards attaining the UI Greenmetrics Rating.

According to UMP Acting Chief Librarian, Dzull Zabarrod Ahmad, the programme aimed at creating awareness on the importance of recycling as well as providing an alternative for cash-strapped students to pay their fines.

“Recycling rate in the university is still low, only 5.2% registered last year and we hope that with this programme, it will increase their awareness on the importance of recycling and the need to protect and preserve the environment,” he said at the official launching of the programme on March 18, 2019.

According to Programme Director, Hajah Siti Aishah Ghani, she hoped that it would bring about positive changes among the university community, adding, the idea for the project was mooted by the Innovative and Creative Team.
The Waste4Fine initiative is available every Wednesday and during the library’s operational hours.
Fines for late return of the library books can still be paid in full or partially by using the plastic bottles or canned drinks.
Library staff stationed at the circulation station will update the record on the fines in its system and issue payment receipts to users who have completed making payments using the barter system.

UMP had also implemented the ‘Let's Break Up with Single-Use Plastic’ to reduce the use of plastic by the campus community, another green effort by UMP Sustainability Committee, set up under the Waste Management Cluster.

The aim was to instil awareness with doing away single-use plastics in the university.

Various programmes on sustainable practices had been carried out including one called ‘MYTAPAU’ of which students would be given incentives if they brought their own containers to pack food from the cafeteria.

UMP was listed 97th on the world ranking and 6th in Malaysia by the UI Greenmetrics World University Ranking 2018.

The rating was based on efforts taken for a green and sustainable campus and environmental management, measures that were announced recently.