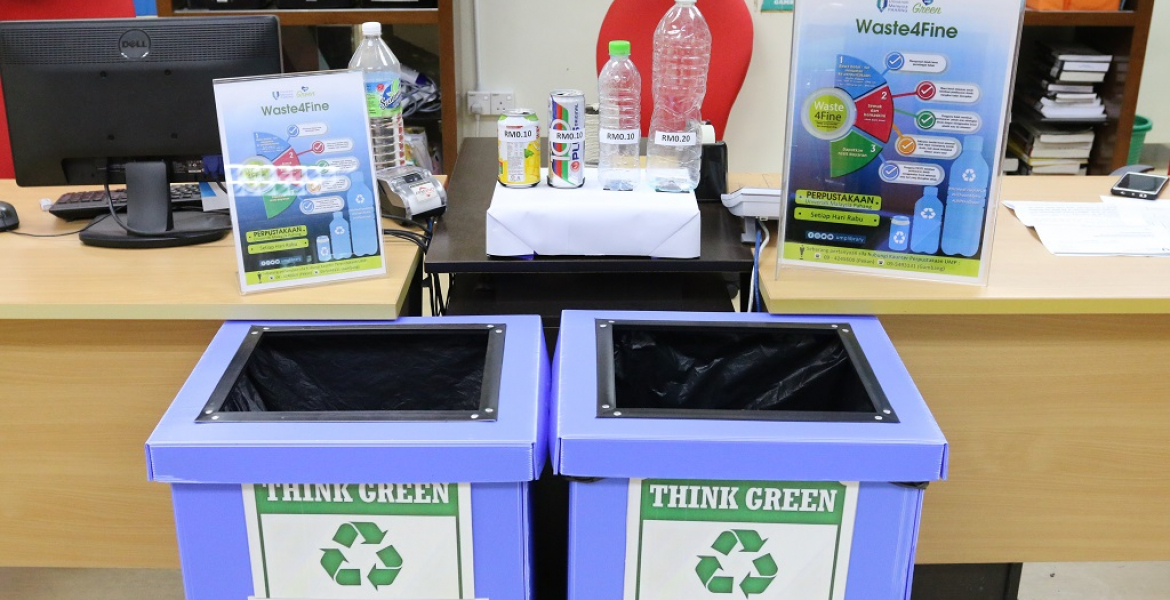 In support of the on-going UI Greenmetric Programme, Universiti Malaysia Pahang (UMP) Library has embarked on a payment mode of fines dubbed Waste4Fine – via plastic drinking bottles and cans – and has implemented it beginning March 13, 2019.

According to Acting Head of Library, Dzull Zabarrod Ahmad, the main objective of Waste4Fine is to inculcate greater awareness on the importance of recycling, and that students who face financial constraints can actually opt to pay their fines with the Waste4Fine alternative.

“By turning in 1-liter plastic drinking bottles, students will earn a 10 sen discount on their Library fines, while similar bottles with more than 1-liter capacity will earn them 20 sen discounts,” he said, explaining the mechanics of such payment mode.

“Students can also pay their fines in full with these plastic drinking bottles,” he added, saying that such payment alternative is, however, available only on Wednesdays during the library’s operational hours.

“To promote and encourage all at UMP to participate in Waste4Fine, the library plans to have an official launch of the programme on April 17, 2019, at the Pekan Campus Library,” she said.

Wan Nurulhuda highlighted such programme is inherent to the recent launch of “Let’s Break Up with Single-Use Plastic” campaign, where students and faculty members alike are encouraged to reduce the usage of plastics.

“The campaign is an initiative by UMP Sustainability Committee, which falls under the purview of the Waste Management Cluster, to inculcate greater awareness on the need to reduce and eventually, abandon single-use plastics on university ground,” she added.