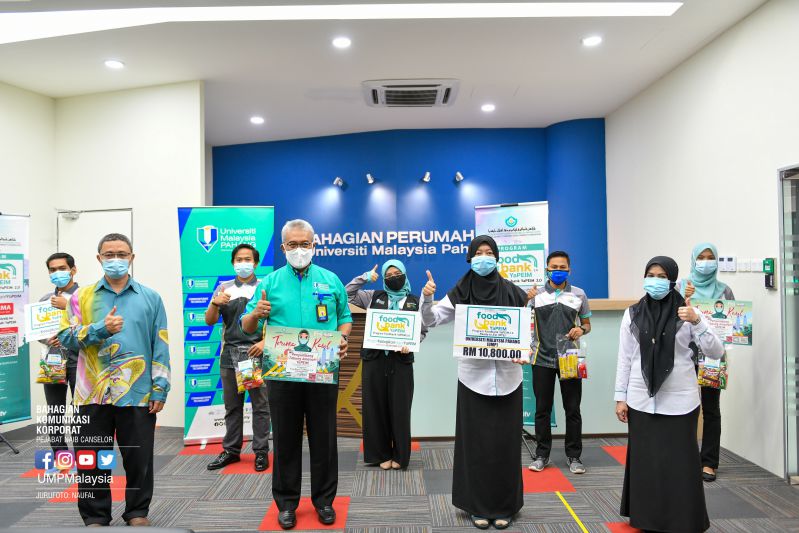 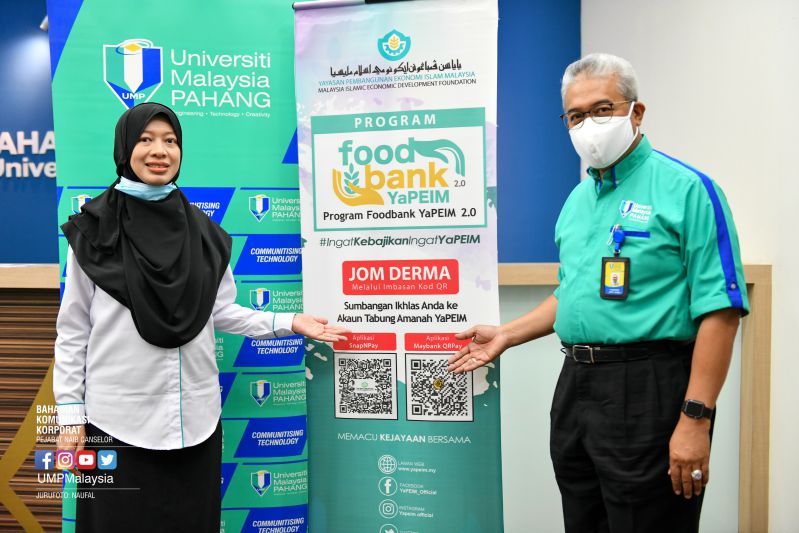 Pekan, 15 October 2020 - A total of 200 Universiti Malaysia Pahang (UMP) students who live off-campus and cannot return to their hometowns received food donations in the Foodbank 2.0 programme organised by the Malaysian Islamic Economic Development Foundation (YaPEIM).
The aid was handed over by the Deputy Vice-Chancellor (Student Affairs & Alumni), Professor Dato’ Ts. Yuserrie Zainuddin and Pahang YaPEIM Manager, Nor Khalilah Hanaim Abdul Hamid.
In the event, Nor Khalilah Hanaim presented a mock cheque as a symbol of food donation worth RM10,800 to Professor Dato’ Ts Dr. Yuserrie Zainuddin in the Student Activity Centre Meeting Room, UMP Pekan.
According to Nor Khalilah Hanaim, this programme was a continuation of last year which had donated food items worth RM7,500 to 250 UMP students and this time it was RM10,800.

“This aid takes into account the constraints and difficulties faced by students who are unable to return to their hometowns due to the COVID-19 pandemic.

“This is also a public contribution given to YaPIEM for us to distribute to the people in need, including students of higher education institutions (HEI).

“This year, YaPIEM Pahang has allocated RM54,000 for several HEIs in Pahang involving 1,000 students,” she said.

She also called on individuals who wish to contribute to use the SnapNPay or QRPay mobile apps.

He hoped that this contribution can ease the burden of students. Moreover, some of them are currently sitting for online final exams.

The donation was distributed simultaneously involving 30 houses around UMP Pekan and another 20 around UMP Gambang.
The programme also involved 15 volunteers among students and the staff of Student Affairs and Alumni Department (JHEPA).
In addition to biscuits, bread and drinks, they also received rice, cooking oil, sugar, flour and milk.
One of the recipients, a Bachelor of Electrical Engineering (Power System) student, Jeff Collven Son Claisdell Lorren, 23, also thanked YaPIEM and UMP.

“This aid eases our expenses during our stay here.

“My housemate and I decided not to return to our hometowns in Sabah and Sarawak because we wanted to have a stable internet connection during the online learning throughout the semester,” he said.

He was grateful for the concern of the university to help students, including those who live off-campus.

By: Nor Salwana Mohd Idris, Public Relations Unit, Office of The Vice-Chancellor