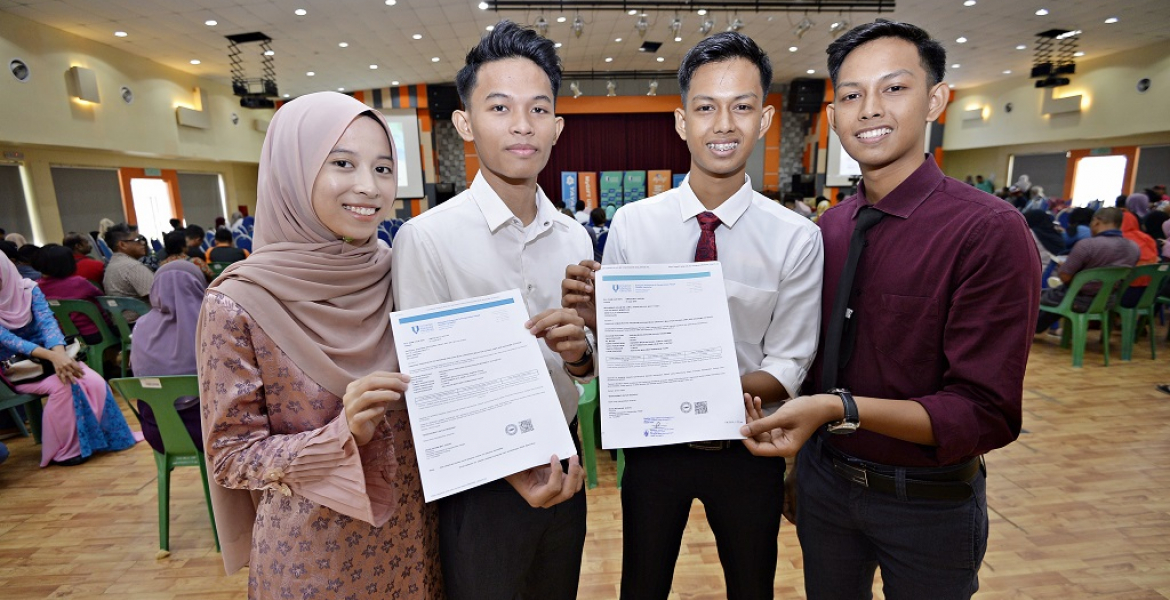 Two pairs of twins pursued their studies in UMP

Two pairs of twins quickly became the centre of attraction during the registration of new students for the bachelor’s degree programme for the academic year of 2019/2020 held at Universiti Malaysia Pahang (UMP) on September 2, 2019.
Muhammad Adham Jamal Akhbar and Muhammad Akram Jamal Akhbar, 19, and Safrizal Syazwan Zainal Hayat and Safrina Syazwanie Zainal Hayat, 19, were among 1,880 students who registered that day.
They arrived as early as 8.00 am.
Nor Khamsiah Mansor, 50, mother to Adham and Akram, said the family was grateful that both of them were able to continue their studies in UMP although both signed up for different courses.
“Both of them have never been separated since small.
“At first, I was very worried if they would be studying in different universities, thinking how are we to send them at the same time. However, fate has it that they are to continue their studies in the same university.
“However, Adham would be pursuing his degree in Civil Engineering in UMP Gambang Campus while Akram would be pursuing his degree in mechanical engineering in UMP Pekan,” she added.
Nor Khamsiah also said she and her husband, Jamal Akbar Ahmad, 46, had made comparisons with several other universities before deciding on UMP as the university had attained various achievements in the engineering field.
“As such, UMP was picked as their first choice when they submitted the UPU Online application.
“As parents, we always encourage our children and have never prevented them to choose the course that they have interests in. However, both of them have always wanted to become engineers,” she said.
Adham and Akram, who are from Terengganu, were former students of Pahang Engineering Matriculation College (KMKPh).
As for Zainal Hayat Abdullah, 43, and his wife Masjuliana Muslim, 43, who are parents of Safrizal Syazwan and Safrina Syazwanie, they said that they did not expect the twins to get offers from UMP.
Safrizal Syazwan is a Mechanical Engineering (Automotive) undergraduate while Safrina Syazwanie is pursuing her degree in Chemical Engineering.