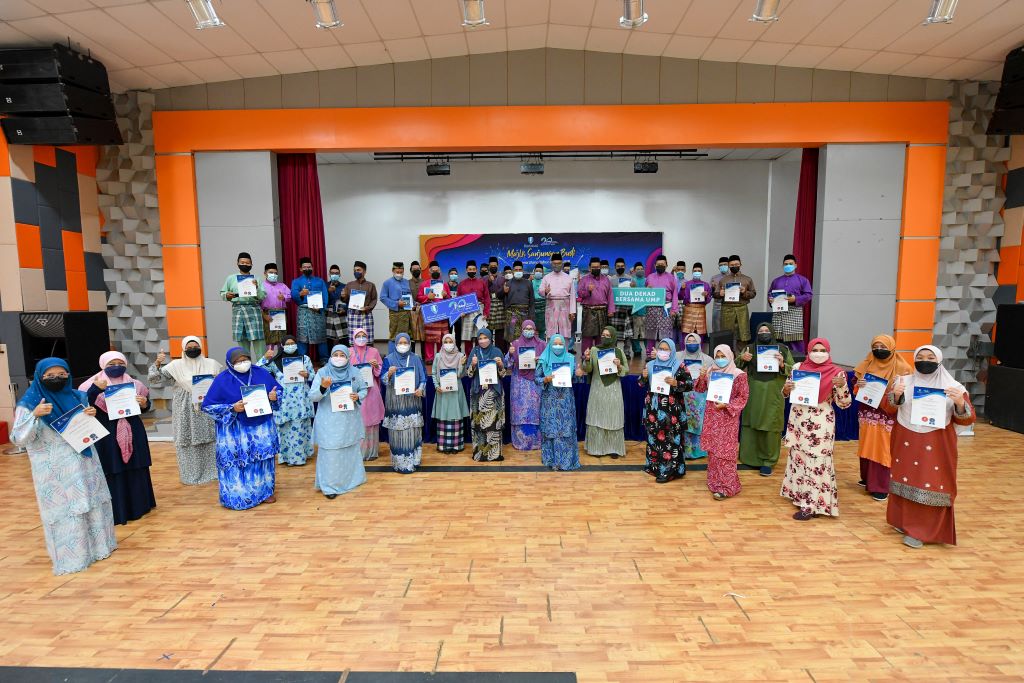 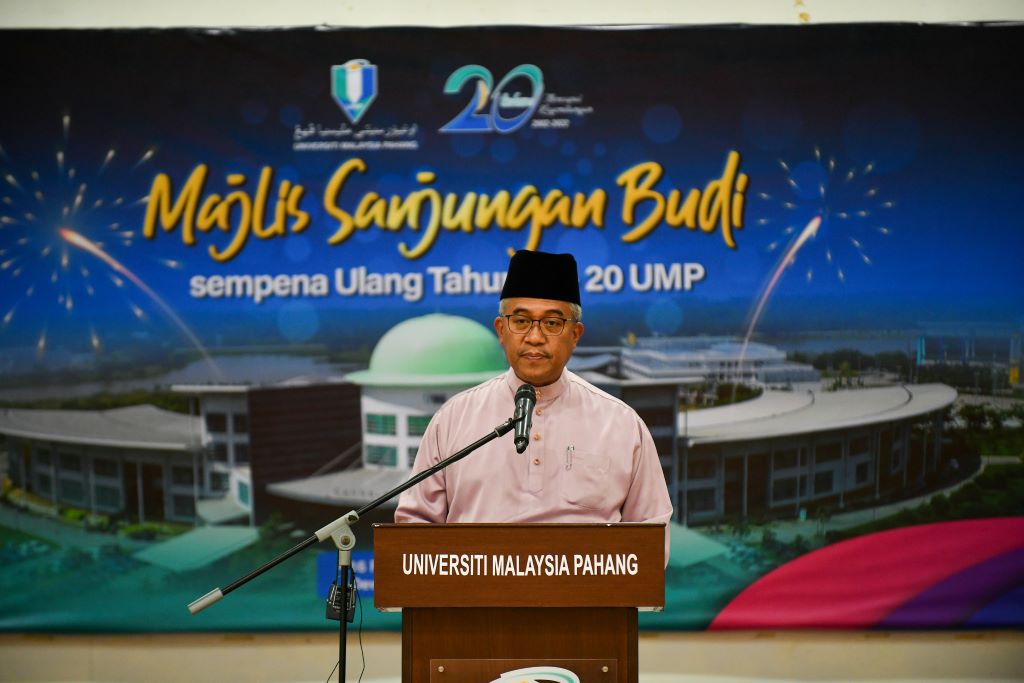 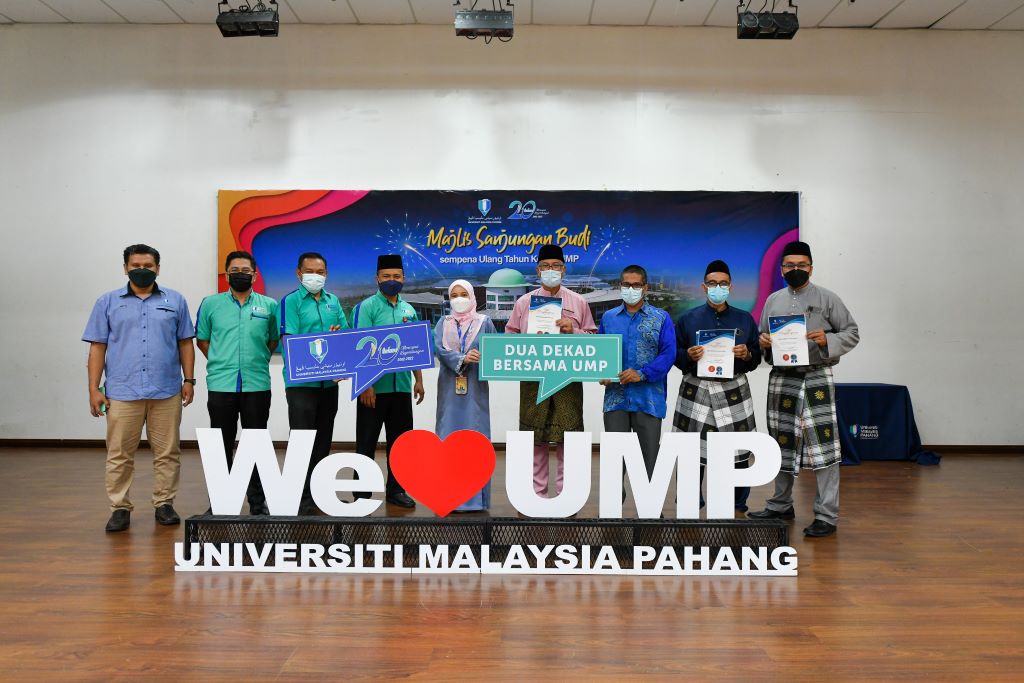 PAYA BESAR, 16 February 2022 – Sixty-three Universiti Malaysia Pahang (UMP) staff who have contributed their services for more than two decades at this university were celebrated in Majlis Sanjungan Budi in conjunction with UMP’s 20th Anniversary Celebration this year.

The ceremony saw Professor Dato’ Ts. Dr. Yuserrie Zainuddin presented certificates of appreciation to the recipients in a recent programme organised by the Registry Department at UMP Astaka Hall.

According to Professor Dato’ Ts. Dr. Yuserrie, 20 years is not a short period; UMP has gone through all the challenges, competed to be the best higher education institution, and the stakeholders’ choice.

“Alhamdulillah, and I am grateful when UMP associates have been able to overcome various challenges and obstacles for the past 20 years.

“You all were among the movers and anchors of UMP at that time.

He said the university highly praised and thanked all UMP associates who have worked together to improve the excellence of this beloved UMP. 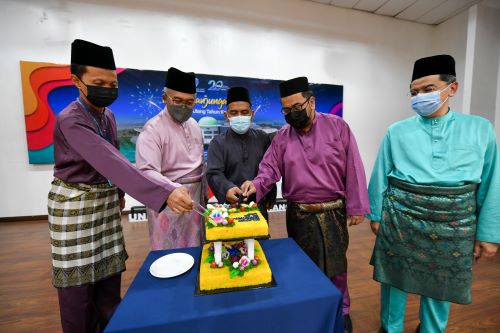 “In fact, until now, UMP has succeeded in achieving its ambitions of excellence, producing research materials at the local and international levels and most importantly producing thousands of graduates to navigate the professional career spaces, local and abroad.

“The excellence of these graduates has enhanced the image of UMP as a prominent institution of higher learning.

“The recognition that has been received by UMP in these two decades proves that at this age, we can lead in all aspects,” he said.

He also hoped that the positive legacy displayed by the UMP associates should be instilled so that it can be a good example in daily affairs.

He added that although the country is still facing the threat of the COVID-19 pandemic, it is not an obstacle to realise the historic moment of new norm UMP’s 20th Anniversary celebration.
Highlighting the history of 16 February 2002, the Federal Government agreed to establish a 16th Higher Education Institution, the University College of Engineering and Technology Malaysia (KUKTEM), later known as Universiti Malaysia Pahang (UMP) on 1 February 2007.

In the 20th year of its establishment, UMP continues to be committed to progress and become a landmark of progress and excellence of knowledge in Pahang Darul Makmur in particular and Malaysia in general as one of the universities in the Malaysian Technical University Network (MTUN).

For Aluwi Mohd Sikah from the Centre for Property Management and Development (PPPH) and his wife, Hazariana Abdul Hamid from the Centre for Information and Communication Technology (PTMK), various bittersweet experiences with UMP will always be etched in their memories, and they are proud with the current development of the university.

According to Aluwi, as a senior who has been with UMP for the past 20 years, he has witnessed various university developments year after year.

“My wife and I would like to thank UMP for awarding certificates and RM1000 in recognition of the staff who have served for 20 years,” he said.

As a sign of support and gratitude to UMP associates, Professor Dato’ Ts. Dr. Yuserrie also announced a special price offer and a discount rebate of up to 60 per cent will be given especially to UMP associates interested in having a special UMP registration number.

Those interested can visit the Yayasan UMP counter, which will be opened on 23 and 24 February.

Also taking place on this historic day was the recitation of Yasin and Doa Selamat organised by the Islamic and Human Development Centre (PIMPIN) and the Office of the Vice-Chancellor (PNC), which was held simultaneously at both campuses and online with the participation of more than 200 campus residents.

He is currently an Adjunct Professor at the Faculty of Electrical and Electronic Engineering Technology (FTKEE), UMP.