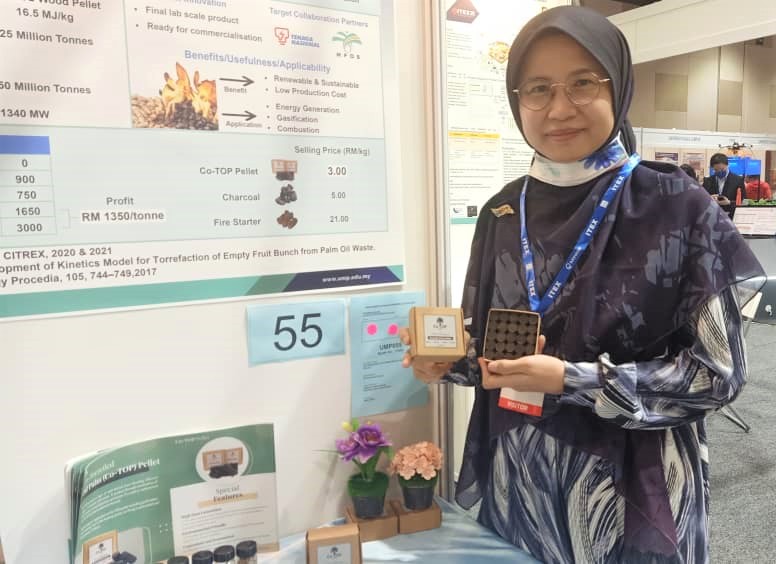 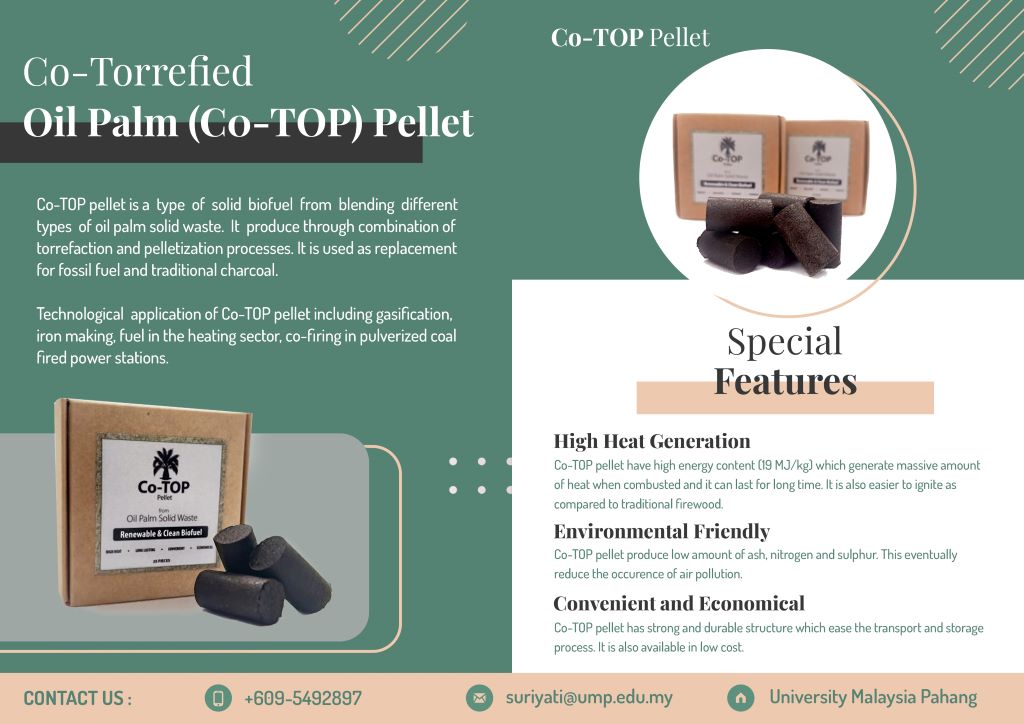 According to Dr. Suriyati, this research began in April 2014, upon her return from completing her Doctor of Philosophy (Ph.D.) study at Denmark Technical University (DTU).

“During the research at the Ph.D. level, I used solid waste found in European countries, such as waste from wheat trees, forestry waste, and silvergrass (miscanthus).

“These waste materials were treated using the torrefaction process to produce fuel.

“In Malaysia, I see a large area of palm oil mills filled with oil palm waste that attracts flies, thus causing the spread of infectious diseases,” she said.

In 2014, she received a research grant under the Fundamental Research Grant Scheme (FRGS) from the Ministry of Higher Education (MoHE) to initiate this study.

In the early research stage, she carried out a treatment process known as torrefaction to obtain optimal conditions for oil palm waste to be used as fuel.

“After the first successful phase, I continued the study by adding another process of pelletisation after the torrefaction process to improve the quality of the fuel produced.

“The next study was conducted under the second FRGS grant obtained in 2019.

“Initially, one type of oil palm waste was used to produce pellets, but later I found that there was a need to use more than one oil palm waste material to be used as pellets,” she said.

She added that from that point, the Co-TOP pellet is produced using two types of oil palm waste of different physical and chemical properties to be used as fuel in the form of pellets.

“The Co-TOP pellet research officially began in January 2019 and was successfully completed on 30 June 2021.

“This research is based on the concept of waste to energy, i.e., waste from plantations or industries that can be processed and used to produce more useful materials.

“In this case, the waste from the processing of oil palm fruits such as coir, shells, bunches, leaves, and fronds is used as the main ingredient for producing pellets,” she said.

She added that most oil palm waste is disposed of as fuel for producing steam in the mill or disposed of naturally on the plantation.

“The main problem with the use of waste as a fuel is air pollution due to the release of harmful gases such as NOx, SO2, CO, and CO2 as well as the energy generated from combustion is low.

“Therefore, the fuel needs to be treated to enhance its capacity to be used as an energy source.

She said the oil palm waste goes through a treatment process known as torrefaction and subsequently pelletisation process to produce pellets.

“Co-TOP pellet can be used in domestic appliances such as stoves and barbecue racks.

“In addition, it can be used for industrial applications such as boilers, gasifiers, and coal-fired electric power generating stations,” she said.

Co-TOP pellets are the same as wood charcoal and fire starters in the market.

Co-TOP pellets are more environmentally friendly than wood charcoal and fire starters because they contain a low sulfur and nitrogen content.

According to her, the final goal of this research is to produce Co-TOP pellets on a large scale to benefit all Malaysians.

“This will ultimately reduce carbon dioxide emissions in Malaysia.

“In the future, I plan to use the different types of waste available in Malaysia such as food waste, wood, plastic, and used oil to improve the function of Co-TOP pellet,” she explained.

Dr. Suriyati added that it is hoped that Co-TOP pellet will be in the market to replace existing fuels to support the National Biomass Strategy to increase the use of biomass in the production of energy resources.

“In addition, to place Co-TOP pellet in the Malaysian market, we will strive to establish joint ventures with government agencies and private companies such as the Malaysia Palm Oil Board (MPOB) and Tenaga Nasional Berhad (TNB).

“The estimated cost for equipment including mixer, furnace, and pelletiser for Co-TOP pellet is RM100,000.00,” she said.

The research also bagged a gold medal at the International Invention, Innovation and Technology Exhibition (ITEX) 2021, held at Kuala Lumpur Convention Centre from 13 to 14 December 2021.